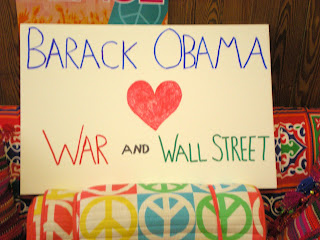 For days I bitched about Occupy DC's participation in a rally for infrastructure spending with the SEIU, a bitching that hit a fever pitch after the latter endorsed Barack Obama as the candidate of the 99 percent. But I'll tell you what: I can't give up a good opportunity to protest and a chance to open a few minds -- or at least piss a few off.

So, with pushing back against co-option on my mind, I decided I'd head down to Georgetown and the Key Bridge after all, but armed with a sign speaking for the 90 percent of the 99 percent who don't believe the president represents their interests. I tend to prefer signs calling out the institutional problems with the system, not the personnel, but the SEIU kind of forced my hand.

The response was interesting.

From actual occupiers, the people I recognized from camping out at McPherson Square this past week, the reactions were universally positive, which should assuage some fears that the Occupy movement will turn into a Democratic get-out-the-vote machine. I also got a few honks, in addition to some angry shouts, including the ever-so clever "get a job."

At one point as I held the sign out to traffic crossing the bridge, a Circulator bus full of commuters stopped, the driver opening his door to tell me "that's not true, he doesn't love war," as he shook his head. I then explained that he had in fact doubled the troops in Afghanistan, killing thousands of civilians and -- knowing my audience, this being America and all -- more U.S. soldiers than in the eight years George W. Bush oversaw the occupation. I also mentioned the drone wars in Pakistan, Yemen and Somalia.

A funny thing then happened. "Is that true?" the driver asked. A fellow occupier interjected: "Yeah, it is." With a look of having genuinely learned something, the driver nodded his head.

Wait, I thought, did I just have a successful political conversation with someone who started by hollering at me from his vehicle? Weird.

The conversation I had earlier with a suit-wearing, self-described private contractor for the State Department was a bit more . . . tense. Demanding to know what my sign "meant," which I thought was pretty clear, said contractor proceeded to reaffirm every caricature of a mindless, subservient supporter of state I ever held. What follows are, I swear to the gods, verbatim excerpts from of our conversation:


Me: Obama's foreign policy is the same as Bush's. He has just expanded the war on terror.

He doubled the number of troops in Afghanistan.

No, he surged the troops in Afghanistan. Just like Bush.

He has authorized more drone strikes in Pakistan than Bush did in eight years, killing thousands of innocent civilians.

Well, under the Constitution even traitors are supposed to have trials to determine they are traitors. Should we really trust one man to decide who lives or dies?

I trust my government.

So what would you have us do?

I would have us pull all our troops out of every country and bring them home. Something like 95 percent of suicide attacks are the result of foreign occupations. You don't see terrorists going after Switzerland.

Well, that's because they don't have a military.


As Upton Sinclair said, it's difficult to get someone to understand something when their salary depends on their not understanding it.

Posted by Charles Davis at 8:35 AM