Occupy everywhere, but maybe not the Key Bridge 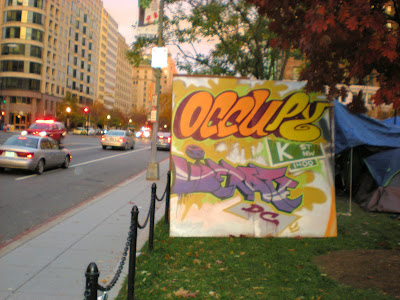 Shaking from the cold at 3 in the morning on a park bench a few blocks from the White House, warmed only by a paper-thin prison blanket an empathetic passer-by had gifted me, I couldn't help but think: man, am I a bad ass or what?


Well, not really. Mostly I thought about being cold and whether my overwhelmingly witty sign – American Dream = Park Place, American Reality = Park Bench – made it all worth it. And then I thought about how this is what homeless people in the imperial capital go through every night. And how no one cares. And then I was kind of sad.

I had arrived at the Occupy K Street camp in Washington's McPherson Square earlier that Sunday afternoon with high hopes of crafting a slew of strongly worded protest signs and obtaining some much-need winter gear (I usually don't wear shoes in Nicaragua).

Only my aforementioned perceived wit came through. So make signs I did.

“What's that one going to say?” asked a smiling older woman as I worked my magic in the official sign-making tent. One of the decidedly more respectable, bourgeois-looking crowd that shows up on the weekends, she would not have been out of place at your Aunt Judy's Christmas dinner in an anonymous, upper-end suburban development.

“It's going to say, 'Don't Vote for Change (TM), Make Change,'” I replied. Her smile disappeared. A blank stare took its place. 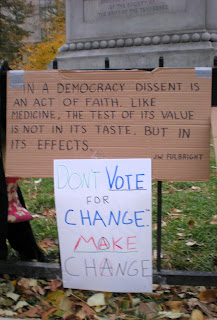 Such is the tension at Occupy DC: Judging by the socialist papers and anarchist symbols I see, there are quite a few radicals on hand at McPherson Square. But there are also quite a few – probably a plurality – who would identify as “progressives,” the sort that see their participation in the movement as a means of countering the Tea Party and building support for the banal, Democrat-friendly reformism embodied by the likes of Elizabeth Warren.

As it happens, the same woman who blank-stared me over my sign had hung about a half-dozen of her own around the fenced in statue at the center of McPherson Square, all of them concern-trolling her fellow – but dirtier – protesters. So-and-so never used the “F-word,” said one. So-and-so called his judge “brother.” Martin Luther King Jr. never referred to the police as “pigs” – the latter one I couldn't help but modify with a sign of my own noting that Fred Hampton, a leader of the Blank Panthers who was assassinated by the police, sure did.

But it is this Respectable Liberal segment of Occupy DC that I believe is more or less running the show, which is no more apparent than in the actions that have received the official endorsement of the DC camp. While I was down with protestingthe Koch brothers and their reactionary brand of faux-free market libertarianism earlier this month, there's no denying they are a liberal bogeyman, a useful distraction for the good, Obama-fearing Democrat from their own party's complicity in the tyranny of the corporate state.

More troubling, though, is Occupy DC's participation in the November 17 day of action organized by labor unions and Democratic front groups like MoveOn.org and Van Jones' Rebuild the Dream. As the SEIU's description of the event, circulated by Occupy DC, makes clear, the call is not for radical change, but for – get ready to groan – passing Obama's jobs bill and standing up to “obstructionists in Congress [who] refuse to create jobs by investing in public workers and infrastructure and refuse to make the richest 1% pay a little more in taxes.” 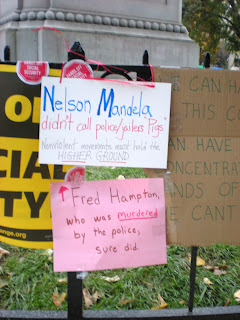 In DC, the event takes place at the Key Bridge into Georgetown, the very site Barack Obama used to highlight the infrastructure spending aspects of his latest stimulus bill. It's also the same bridge Transportation Secretary Ray LaHood pointed to – or rather, one of his staffers – as reason to pass the legislation.

In other words, by engaging in a protest at the Key Bridge, Occupy DC will be helping further an Obama administration talking point, which will not only will give the movement a sickly blue partisan hue, it's on behalf of a substantively questionable proposal.

Now, repairing dangerous bridges is all well and good. But infrastructure spending in general? What's good for the construction worker is not necessarily good for the rest of us. While I sympathize with the out-of-work road builder, I can't bring myself to endorse a boost in infrastructure spending that would undoubtedly mean expanding existing highways and building new ones, further cementing a car culture that has resulted in environmentally and culturally destructive suburban sprawl and the fact that the transportation sector accounts for a third of U.S. greenhouse gas emissions.

Indeed, the action itself will be taking place on the sidewalks of the key bridge, with protesters under strict orders not to obstruct traffic, meaning they will be obstructing pedestrians but not Hummers. Pragmatically, I get that: it's a felony to block traffic on a bridge in DC If you're protesting outside a military base housing drones? Sure, lay down in that road. But if you're protesting for something as lame as more spending on highways, I'd have to agree it's not worth the risk.

But then, neither is the protest itself worth the risk to the Occupy movement.

Unfortunately, those planning the actions don't seem to think so. Like those who facilitate the general assemblies, the action committee is disproportionately white and male compared to the surrounding community rest of the camp at McPherson (full disclosure: I'm white and male too, just observing is all). Based on my initial firsthand impressions, it also leans progressive, not radical, its members seemingly less fearful of co-option than the prospect that others at the camp will not abide by their instructions to not block traffic on the bridge.

By contrast, the criminal justice committee I attended is about 80 percent black and Hispanic and, from what I heard, more interested in direct action against. Specifically, people were discussing protests outside branches of Wells Fargo, which just took over all the Wachovia locations here in DC, highlighting to the local community its role in the mass incarceration of poor minorities by way of its investment in private prison company GEO, of which it is the third largest shareholder.

That sort of protest, I think, could unite all the various Occupy factions while bringing in new members and admiration from the local community. The problem is: the criminal justice committee is not the action committee, through which all “official” Occupy DC events need to go. 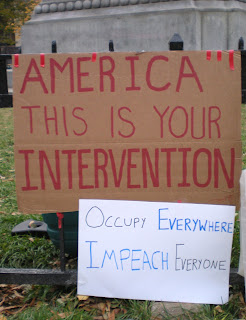 But it's a problem that can be fixed. Because of the non-hierarchical structure of the Occupy movement, its domination by the more timid variety of progressive Democrat can be countered. Instead of just complaining about it on the Internet, one can show up at the next action committee hearing and, if something objectionably timid and partisan comes up, try and change some minds – or block it. And radical nuts like me can just walk up and join the action committee and suggests more radical, nutty actions.

I also hope the passage of time will improve things, by which I of course am referring to the process of radicalization. While, like others, I was skeptical of the value of simply creating a living, community space by way of a camp – we ought to be protesting, damn it, not laying around playing drums – after spending some time there I see it as a way of demonstrating that communities can in fact be built on consensus, not coercion.


At McPherson Square, there is free food, basic medical care and an impressively stocked library full of everything from radical literature to Michael Crichton. In the middle of the nation's capital, there is an admittedly flawed but nonetheless functional community not dependent on the use of force that is providing services, to both occupiers and the homeless that were there before, that the city itself refused to adequately provide. 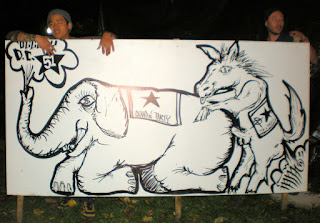 And these sorts of communities have been replicated across the country. How can that not at least open a few minds to the possibility of radical change and, dare I say, the practicality of anarchism?

Yet, despite its overwhelmingly peaceful nature, the Occupy movement from Oakland to Wall Street exists under the perpetual threat of at-a-moment's-notice eviction. If that doesn't show that the system only fears radical challenges to its authority – as opposed to reformist calls embodied by online petitions and confined-to-the-sidewalk protests brought to you by MoveOn.org – I'm not sure what will. And that's why, though I think the movement is currently flawed, I remain hopeful about its future.
Posted by Charles Davis at 9:03 AM