Declaring what Occupy DC stands for 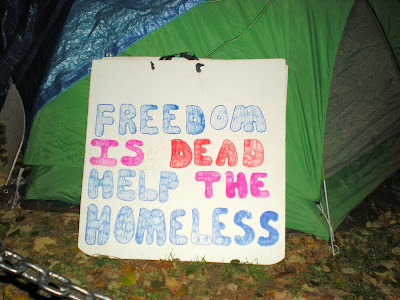 I was prepared to be disappointed. I was prepared to escalate from a simple downward twinkle fingers to an outright block, you “progressive” Democrat, willing-being-co-opted mother fuckers. But, gosh darn it, I was pleasantly surprised.

After being disappointed in some of Occupy DC's choice of actions, including a rally for more infrastructure spending sponsored by the same SEIU that just endorsed Barack Obama as the candidate of the 99 percent, I was expecting the worst when the time came at Wednesday's general assembly to read the McPherson Square chapter of the occupy movement's long-awaited draft declaration of grievances. Perhaps a line about the Koch brothers “corrupting” our long corrupt democracy. Maybe something about a certain someone failing to deliver the change he purportedly promised.

To my chagrin, even my black anarchist heart was rather impressed.

Typically, works written by a committee of people with diverse backgrounds and interests tend to be watered down, unreadable pieces of garbage. So it's actually something of a miracle that a protest movement composed of people whose pet personal issue ranges from the tyranny of “fiat money” to the evil of institutional racism were able to produce a document that was even coherent. While the draft declaration wasn't read aloud by a burning bush, miracles do sometimes happen.

There was a strong denunciation of the collusion between the state and the financial sector. A call to end the wars. An attack on the two-party electoral system. A condemnation of a criminal justice (sic) system that persecutes the least privileged communities in America rather than protect them. While not perfect, by any means – it conspicuously avoided the words “empire” and “imperialism,” for one, and did not adequately stress the disproportional negative impact the status quo has on the poor and people of color – it was, all in all, pretty good.

And then we got to people's grievances with the statement of our grievances. Oh goodness.

Personally, while I would have liked the statement to have a bit more teeth when coming to war – and to have the statement about its impact on “American soldiers and innocent civilians” inverted in accordance with those who actually bear the bulk of its evils – my only real, somewhat nitpicky objection came to a line that declared the government had “failed in its duty” to protect the rights of Americans. At the general assembly, I politely noted that, historically, states haven't been established by people to protect rights, but rather to infringe upon them, namely to enable the economic exploitation of one class, the workers, by another, the owners. The stuff about protecting freedom and all that jazz? It's propaganda from the exploiters.

The U.S. government's founders, I noted, talked a pretty solid game about human rights and personal freedoms – at the same time they were propping up the institution of slavery and carrying out the genocide of indigenous peoples. The founding fathers didn't establish a state to protect the rights of anyone and everyone, I pointed out, but of themselves: the white, landed aristocracy.

But I was one of many – about 30 – people that had issues with the declaration, too many to address in the context of a general assembly during a rain shower. So a declaration committee hearing was called, a three-hour lesson in the sometimes unbearable tediousness of consensus.

At the meeting, held in the unbearably ironic setting of a 24-hour McDonald's, people objected to the use of the word “occupation.” Others said, I agreed, that racial injustices weren't adequately highlighted, though the self-righteous, emotional blackmailing way one woman made her case – complete with a claim the majority of the declaration was written exclusively by and for white males (it was actually based on a consensus process involving anyone who wanted to join in at McPherson Square) and a wavering statement she was “scared” because race was only referenced in three of the eight or so clauses – had me groaning a bit.

Another man – a very strange man – said the declaration ought to include references to discrimination against height-disadvantaged people and the plight of men forced to pay child support. Later, when prevented from speaking out of turn to voice his objection to the indisputable fact that the top 1 percent are predominately white males, he got up and very aggressively confronted the female facilitator, standing about six inches away from her face. We all understood why he was divorced.

A man originally from El Salvador then brought up the issue of empire, pointing out that he was only in the United States due to a civil war funded by the Reagan administration. “Here we are in the most powerful city in the world, where the people in the buildings around us literally decide who lives and who dies, and we don't even mention imperialism?” I twinkle-fingered the hell out of that shit.

When it got to be my turn, I reiterated by object to the stuff about the government's “duty” to protect our rights, saying it implied that the state had ever done so, when in fact its purpose is to exploit, not protect. I suggested simply truncating the sentence so as to say that the government had “not protected our rights,” leaving aside the question of whether it was ever intended or capable of doing so. That way, I figured, the language could be inclusive of both anarchists, who compose a not insignificant part of the Occupy movement, and non-anarchists (statists! *boo, hiss*).

See? Even radicals can compromise.

Unfortunately, a lot of people were confused. Many appeared to think my objection was simply that the line didn't make clear that the government has been failing to protect our rights from its inception; the implication it's a recent phenomenon that we're only now noticing because middle-class white kids have read the Wikipedia page about the PATRIOT Act. But no! I replied: it's the idea implied by the word “duty” that the state has the responsibility to protect our rights, that that is what it was established to do.

Let's say you have a spoon. You're trying to cut a steak with this spoon. It doesn't work. So you get more and better spoons. Hell, you even get a spork. Still no luck. Maybe, you might conclude after a few fruitless hours of spooning, a spoon isn't intended to cut a steak – that maybe it's intended to do something entirely different.

Likewise, if the U.S. government has never proven itself capable of protecting the rights of those who live within its borders, as evidenced by slavery to genocide to mass incarceration, then maybe, one might fairly conclude, it was never meant to protect those rights – that references to its “duty” to do so are like referencing the “duty” of a butcher to protect the lives of cows and pigs.

One woman did get what I was saying. But she also uttered the single most upsetting thing of the night: Sure, she said, you might not think the state has a “duty” to protect our rights, but most people in mainstream America do. And we're trying to appeal to them, comrade.

By reinforcing their dangerously mistaken dogma? I might have asked had my alloted anarchist time not been used up. The same objection – appealing to “mainstream” America – was raised by people opposing the use of the terms “empire” and “imperialism,”

“Do you feel your voice has been heard?” the facilitator asked. “Yeah, whatever,” I mumbled.

By the time three hours had passed, we were no further along than when we started, having not gotten past the mere restating of the grievances we originally aired at the general assembly, much less gotten to the point of actually addressing them by way of changes to the draft.

And so we now have to do the whole thing again. And probably again. And again. And . . .
Posted by Charles Davis at 5:52 AM