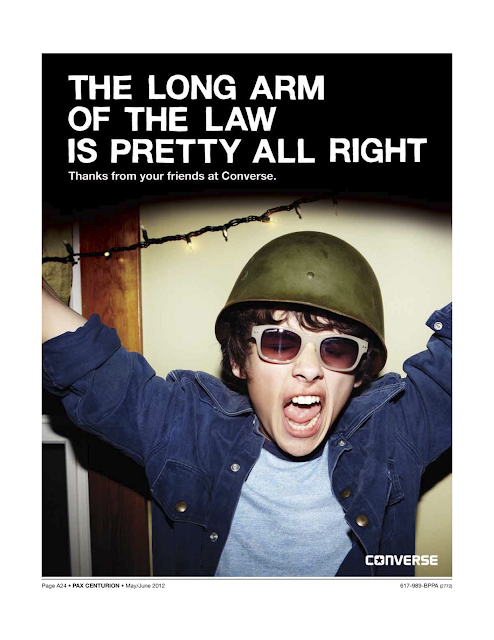 If you hate yourself and want to extend that hate to the world around you, check out the rest of the issue (the final stab to the gut: it's a PDF).
Posted by Charles Davis at 4:39 AM 6 comments:

Along the way I had to sell my soul

Posted by Charles Davis at 9:50 AM No comments:

Apparently people are catching on to the fact that the Nick Kristof-approved Change.org may not be as do-goodery and progressive as its do-goodery name might suggest. As Ryan Grim reports, the for-profit petitions-and-political-consulting company recently took a lot of heat for taking cash from corporate education reform groups associated with Michelle Rhee, a contract it ultimately dumped for incoherent reasons.

Indeed, a public statement from the company only rationalizes the initial decision to take money from a corporate front group, saying it was made in keeping with the its "open, democratic philosophy." The only explanation of the move to reject the cash is that users complained. Privately, "Change.org leaders" told Grim:


"the outrage resulted from a misunderstanding of the company's goal, which is not to spread American-style progressive values around the globe, but rather to empower as many people as possible under the theory that the world will be better as a result. By not embracing American progressivism, the company said it hopes to make its platform more welcoming to people around the globe who might see such an association as imperialist or anti-Muslim."

This is great, as in explaining a move designed to appease American progressives Change.org is suggesting that associating one's self with "American progressivism" could plausibly be seen as "imperalist or anti-Muslim," which -- though they presumably didn't meant it that way -- has the stingingly unfortunate distinction of being true, as least as far is it concerns the dominant, Kill List-embracing variety. The problem with a company like Change.org implying this, however, is that even as it bizarrely suggests taking corporate cash is something of an anti-imperialist act, it's taking money from the campaign to reelect the world's leading imperialist: Barack Obama, a guy who has murdered innocent Muslims from Afghanistan to Yemen to Somalia.

So far Change.org has hosted more than 40 petitions from "Obama for America," garnering support from more than 800,000 of its users, including founder and CEO Ben Rattray. Back in the fall of 2010, when I worked there, Rattray was even telling employees he thought his site could be instrumental in Obama's reelection, maybe even garnering him an addition million votes (a bit of hubris that perhaps explains why I was told to quit writing so much about Bradley Manning and to tone down criticisms of the president).

Personally? I don't think an online petition welcoming Joe Biden back to the campaign trail, because "[n]o one energizes a crowd quite like he does," will have much of an impact on anything, which is a problem with a lot of the petitions the company chose to exclusively focus its resources on when it fired all of its writers. But if Change.org doesn't want to be seen as either imperialistic or as an online home for corporate front groups, it should go ahead and kill two drones with one stone: drop the Obama contract.
Posted by Charles Davis at 4:43 AM 1 comment:

Not what you think


"It's just full of accounts of sexual coercion, sexual and physical abuse of chicks, non-procreative sex, and finishes with an account of what he considers homosexual behaviour, and it was fascinating."

Another war criminal cashes in

One could be forgiven for thinking there's anything honorable or honest about Colin Powell. For more than two decades now the Washington media has portrayed the former Secretary of State as something of a real life action hero, a reluctant warrior whose greatest fault – should they deign to mention any – was just being too darn loyal to a guy named George and his buddy Dick. What you might have missed is that Powell is a war criminal in his own right, one who in more than four decades of “public service” helped kill people from Vietnam to Panama to Iraq who never posed a threat to America. But don't just take some anti-war activists' word for it: Powell will proudly tell you as much, so long as he can make a buck from doing it in a book.

Read the rest at Common Dreams.
Posted by Charles Davis at 10:39 AM 3 comments:

This land is my land

Leave it to an Israeli politician, the country's powerful Interior minister in this case, to make the oft-denied parallel between Jewish supremacy in Israel and white supremacy in South Africa as explicit as possible:


[O]n Sunday, Israeli daily Maariv published an interview with Interior Minister Eli Yishai, in which he stated that most of the "Muslims that arrive here do not even believe that this country belongs to us, to the white man."

"I will continue the struggle until the end of my term, with no compromises," Yishai continued, stating that he would use "all the tools to expel the foreigners, until not one infiltrator remains."

Racism exists everywhere, as your liberal Zionist friend has probably already reminded you. The difference is that in the case of Israeli racism, every U.S. politician of national importance (or who wishes to be important some day) pledges their support for it. When the likes of Nancy Pelosi speak fondly of a "Jewish democratic state," they are speaking fondly of a state that values perceived tribal identity -- and supremacy -- over true democracy for all of its inhabitants.

My tip to Israeli pols, though: if you want to continue your white settler project in the Middle East, you're going to want to quit drawing attention to the fact that Israel is a white settler project in the Middle East. American politicians are fine with supporting racism and colonialism, obviously, but the more liberal-minded prefer that fact to be obscured.
Posted by Charles Davis at 9:33 AM 4 comments:

Email ThisBlogThis!Share to TwitterShare to FacebookShare to Pinterest
Labels: Israel/Palestine

Obama expands the war on Iran

In May 2011, the Wall Street Journal reported:


WASHINGTON—The Pentagon has concluded that computer sabotage coming from another country can constitute an act of war, a finding that for the first time opens the door for the U.S. to respond using traditional military force.


WASHINGTON — From his first months in office, President Obama secretly ordered increasingly sophisticated attacks on the computer systems that run Iran’s main nuclear enrichment facilities, significantly expanding America’s first sustained use of cyberweapons, according to participants in the program.

It's a damn good thing the super-sophisticated doctrine of American exceptionalism holds that it's okay for us to do things -- like use and stockpile nuclear weapons -- denied nations with smaller militaries, otherwise someone might well accuse the Obama administration of rank hypocrisy.
Posted by Charles Davis at 1:39 PM No comments:

Posted by Charles Davis at 1:06 PM No comments: