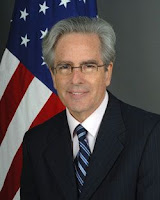 At a State Department press briefing I attended this afternoon, Assistant Secretary for the Bureau of Western Hemisphere Affairs Arturo Valenzuela thoroughly debunked the argument for increased military spending in the Americas, pointing out there is little need for more weapons systems at a time when the continent as a whole is at peace.

"[T]here's been a trend in the Latin American region for -- to a significant decline in arms expenditures as conflicts between countries have waned as a possibility, with the signing of agreements that have resolved long-standing, in many cases -- like between Argentina and Chile or between Ecuador and Peru -- long-standing border disagreements and that kind of thing.

So the overall need for additional expenditures on weaponry is definitely going down. And what we certainly encourage, and all of the countries encourage, is that governments pay much more attention to social expenditures and to trying to improve the standards of living of their -- of their peoples. And I think there's a consensus in the region that in a continent that is essentially at peace, that there really is no need for these kinds of large expenditures."

If you're passingly familiar with American foreign policy and the average State Department official's capacity for self-awareness, you have probably ascertained by now that those remarks are of course not intended to apply to the United States, which faces the specter of Canadian beer to its North and the existential threat of Spanish-speaking Hispanics to its South. No, rather the assistant secretary for whatever-the-hell's comments were directed at Venezuela, which has been circumventing a U.S. ban on weapons purchases by buying arms from Russia.

My prejudices up front: I'm no fan of the buffoonish Hugo Chavez and his brand of centrally planned state socialism, nor do I think any government should really be spending its citizens' money on guns and ammo when it can't even keep the lights on. But I think it's useful to point out that Venezuela is being criticized for purchasing up to $5 billion in arms from Russia – a sizable number, sure, but less than one-fourth of the amount Nobel Peace Prize laureate Barack Obama increased Pentagon spending by this year alone. What Chavez is planning to spend on arms is also roughly equivalent to the value of the weapons the U.S. military simply lost in Iraq. And for context, according to the World Bank Venezuela dedicates just over 1 percent of its gross domestic product to military spending, compared to the U.S.'s more than 4 percent.

The amount the U.S. government spends on its armed forces – and on occupying two foreign nations – also dwarfs the amount it dedicates to social services. Meanwhile, like the rest of the Americas the United States faces no real threat of foreign invasion – sorry Tom Tancredo, immigrants don't count – and yet . . .

Posted by Charles Davis at 1:33 PM