Is Richard Holbrooke illiterate or does he just not care? 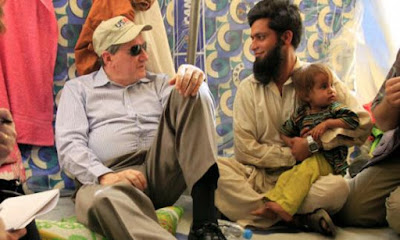 (Holbrooke (left): "I would love to find out who killed your other child, but who has the time?")

Richard Holbrooke, the U.S. official helping oversee the wars in Afghanistan and Pakistan, was asked at a State Department briefing Monday to respond to a report in USA Today that the killing of Afghan civilians has "more than doubled this year," despite American assurances that the protection of the Afghan people is a renewed priority.

"I saw the article in USA Today and a few others," Holbrooke told reporters. But "I haven't had a chance to do a personal drill-down on the details of those statistics, how much of that's caused by the Taliban, how much of it is caused by the effects of the military operations."

Given his efforts at obfuscation, perhaps Holbrooke didn't make it to the second paragraph of the story, where he would have learned that "NATO troops accidentally killed 72 civilians in the first three months of 2010, up from 29 in the same period in 2009, according to figures the International Security Assistance Force gave USA TODAY."

To be fair, though, the article's headline was rather ambiguous: "NATO strikes killing more Afghan civilians".

While pretending not to know who's to blame for Afghan deaths, Holbrooke did acknowledge that "war is hell" and that "civilian casualties are a part of all recent wars." He also noted that "civilian casualties increase as overall operations increase in intensity, and therefore it's not surprising this would happen." And he's right: soldiers are professional killers, not sociologists, so it makes sense that the more there are in a given area, the more killing -- of civilians and enemy alike -- there is likely to take place there.

If avoiding civilian deaths was as much a priority as General Stanley McChrystal and other American officials are fond of suggesting, the Obama administration would be removing troops from Afghanistan, not sending more. But then even good progressives know that protecting the life of an Afghan is much less important than safeguarding the U.S. "national interest" and the lives of red-blooded Americans (i.e. people that matter). But what would an actual humanitarian say?
Posted by Charles Davis at 2:00 PM