Angry Black Lady, the would-be MSNBC contributor who currently blogs for the extremely credible website The Raw Story -- after a career as a lawyer specializing in business and foreclosure litigation on behalf of underprivileged clients like J.P. Morgan Chase and Lloyd's of London -- writing back in March 2011 on the treatment of accused whistle-blower Bradley Manning:

I’m going to wait for some facts, if you don’t mind. And don’t sit here and snark at me about how I’m uncomfortable with the word torture. If it turns out Manning is being tortured, then I’ll happily take up that cause. But thus far, the reporting has been shoddy and bullshit and an appeal to emotion. There is no evidence that Manning’s treatment is torture . . . . Again, there is no righteousness in your position because you don’t know SHIT. If it turns out you’re not being grifted, then I’ll owe you an apology. But for now fuck off and take your self-righteousness back to the Lake where you belong. Leave the critical thinking to those of us who have the capability.

What's happened since then? Well, in April 2011 more than 250 legal experts, including Harvard University's Lawrence Tribe, "considered to be America's foremost liberal authority on constitutional law," signed a letter that called Manning's detention both "degrading and inhumane," as well as "illegal and immoral." That detention entailed Manning spending 23-hours-a-day in solitary confinement, a technique that Craig Haney of the University of California, Santa Cruz, notes has "been used to torture prisoners of war."

Meanwhile, the United Nations' special rapporteur on torture, Juan Mendez, writes in a report released March 2012 after a 14-month investigation that:


"[I]mposing seriously punitive conditions of detention on someone who has not been found guilty of any crime is a violation of his right to physical and psychological integrity as well as of his presumption of innocence."


"[S]olitary confinement is a harsh measure which may cause serious psychological and physiological adverse effects on individuals regardless of their specific conditions." Moreover, "[d]epending on the specific reason for its application, conditions, length, effects and other circumstances, solitary confinement can amount to a breach of article seven of the international covenant on civil and political rights, and to an act defined in article one or article 16 of the convention against torture."

Mendez has called for a ban on all solitary confinement lasting more than 15 days, noting that the United States is one of the most frequent employers of the technique, using it against at least 20,000 of the country's more than 2.3 million prisoners every day. Manning's time in solitary confinement, for reference, was more than nine months.

Clearly, those concerned about Manning's treatment back in March 2011, be they lawyers or activists or concerned citizens of the world, were not "being grifted," in the words of an executive director of a Political Action Committee. Prolonged solitary confinement is just as much torture as water boarding, destroying a person's sense of self worth and, in some cases, their mind. Were George W. Bush still president it's doubtful liberals would invest so much time in denying that in favor of attacks on the alleged whistle-blower.

But back to ABL. Now, a year after some privileged fool had the nerve to bring up past things she has asserted: 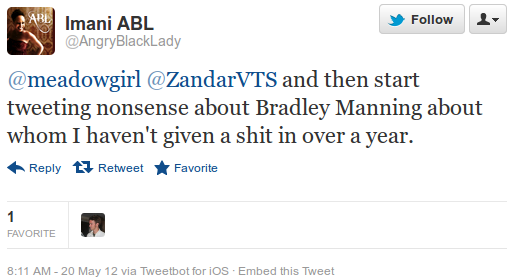 Funny how that works. After initially feigning concern about evils like torture or indefinite detention, ABL then proceeds to denying that there's any reason to be concerned about Barack Obama's role in perpetuating them. Then, after declaring that there's nothing to see here, folks, move along, she then later adopts a pose of disinterested superiority when confronted with inconvenient facts, like a federal judge ruling that American activists did in fact have legitimate fears they could be imprisoned forever under the National Defense Authorization Act (NDAA) signed by Obama or the UN special rapporteur on torture declaring that Manning's extended time in solitary confinement likely violated international conventions against torture.

At other times, she just decides to ignore past expressions of concern in favor of full-throated support for whatever its Obama is doing. For instance, when Zaid Jilani, at the time with that bastion anti-Obama hackery the Center for American Progress, argued ABL ignores Obama's bombing of poor brown people all because she studiously ignores Obama's bombing of poor brown people – and mocks as unserious, privileged “emoprogs” those – she responded, hurt, that, “Of course I don’t favor bombing brown people.” It's just that not bombing poor brown people must be “balanced against all else that a president must accomplish before an idea becomes reality.” You know what's coming. About six months later, ABL published a post by a guest blogger accusing New York Times reporter Charlie Savage – author of the 2007 book, Takeover: The Return of the Imperial Presidency & the Subversion of American Democracy – of carrying out a “partisan hit job on President Obama.” His offense: suggesting Obama's unilateral decision to bomb Libya was at odds with a campaign-trail assertion that he would not bomb a country that did not pose an immediate threat without first consulting Congress.

Not fair! Savage “omits . . . the part that narrowly ties [the question posted to Obama] to the circumstances of a preemptive war to stop alleged WMD production where the U.S. is under no imminent threat.” But Libya wasn't even accused of WMD production is the no-really, not-joking objection. And anyway, “the theory of executive power that Savage is holding Obama up against is a discredited libertarian notion of weak executive power shared by Ron Paul and Glenn Greenwald views which have no support in constitutional law jurisprudence." And that reveals ABL and her cadre's perhaps favorite debate technique: when not mocking anyone who objects to Our President's unilateral wars or assassinations as blinded by privilege -- it takes a former lawyer for J.P. Morgan to spot it -- she invariably accuses those who think we should still talk about things like war and peace when a Democrat's in the White House of being little more than Ron Paul or Glenn Greenwald fanboys, just as some conservatives seek to tie any concerns about income inequality to Vladamir Lenin; it's easier to attack a flawed human being than an idea. It doesn't matter if you always objected to extrajudicial executions or unjust wars of aggression, it matters if you object to them under Obama. Because you know who else objects to things Obama does? Racists.

Not content just publishing pro-unilateral war diatribes, ABL -- when not claiming offense after someone points it out -- regularly makes her disregard for foreign life explicit on Twitter, with cute little posts like this: 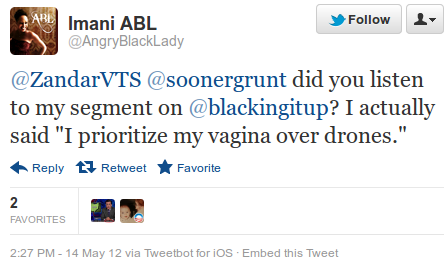 I don't know about you, but I'm sure glad ABL's career representing some of the largest banks and insurers in the world has afforded her the privilege to contribute to the public discourse by way of opining all day on Twitter. Finally we have a corporate lawyer willing to stand up for power and call out the truly privileged: those who think the existence of the Republican Party does not detract from the fact that killing poor foreigners with Hellfire missiles and cluster bombs is wrong.

Update: The original version of this piece said the post on Charlie Savage was "by ABL," because that's what it says. On Twitter, she says she merely published it.