San Diego is a great place. As a college student, I had a lot of fun there. But it's an inescapable, lamentable fact that the whole county is basically just one big military base with a few recreational areas scattered here and there, everyone from Lockheed-Martin to the Marines having decided to set up shop in Southern California. Walk down Pacific Beach's Garnet Avenue at 2am on a Saturday morning -- hypothetically, of course -- and the soldier-to-frat-boy ratio is usually 1:1; private contractors prefer the Gaslamp District. That's why it's encouraging that students at Mission Beach High School were able to successfully drive the military and their JROTC recruiting program off their campus: if they can do it there, it shows its possible to do it anywhere. 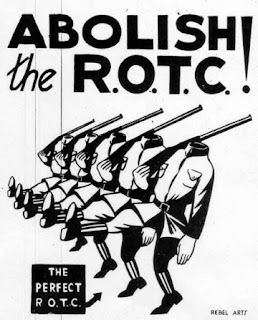 But if their victory is to be replicated elsewhere, it's important to keep in mind the tactics that were employed, most of all that the students didn't win by appealing to authority, but by subverting it. Knowing that the school board and principal who lobbied to bring the military to their school -- along with an on-campus shooting range -- would never turn around and kick them off, the students appealed to their fellow students, speaking directly to the people the Pentagon was trying to recruit. As the Committee Opposed to Militarism and the Draft notes in a writeup about the victory, the "most important factor in the success . . . was the students themselves, who persevered even when their principal and others tried to silence and intimidate them."

Outside activists helped spread the word about the students' struggle within the school by handing out leaflets outside, the committee notes, but the "most significant work was done over a long period inside. Through peer education, the students were able to reverse the 'coolness' equation so that rejecting the lure of JROTC became more legitimate than joining it. Once that happened, a de facto boycott of the program ensued that made it impossible to sustain JROTC."

Ultimately, the JROTC program ended at Mission Beach HS not because the principal caved to the pressure of a letter-writing campaign or online petition, but because the students convinced their peers that they should simply refuse to be recruited, handing out buttons declaring they were "Students Not Soldiers” and “Yo No Soy El Army”. Only because the number of students enrolled for the 2011-2012 school year was less than half the 100 required by law to keep it open and justify the expense of employing two full-time instructors was the recruiting program canceled.

Again: this was in San Diego. As a high school student in the Philly suburbs, I couldn't imagine an anti-recruiting campaign succeeding at my school, where muscular recruiters would set up their propaganda shop in the cafeteria and be fawned over as bad-ass heroes by 14 year olds (thank goodness they were just selling militarism, not cigarettes). But these students succeeded in the heart of imperial beast. Pretty impressive.

There's a lesson in this tale for more than just anti-ROTC activists and counter-recruiters. Meaningful change can't be imposed from the top down as effectively as it can from the bottom up. In order to create that anarcho-topia where the radical notion that it's widely accepted as socially unacceptable to put millions of people in cages or bomb and starve millions of others abroad, a society needs to go through a social revolution, not a mere political one. You don't end war by encouraging a parliament to pass a resolution, or by swapping politicians and governing forms, but by creating a culture that finds blowing innocent men, women and children to bits as abhorrent as pushing an old lady into oncoming traffic. Those in power can't start wars if they don't find anybody willing to fight them.

Now, a social revolution isn't any easy to thing to pull off. Changing society's values can take years, often generations. But if you'd like the chance to live in a world where violence isn't deemed acceptable simply if it has the world "state" in front of it, you're going to have to do a lot more than win an election. You're going to have to change people's minds.
Posted by Charles Davis at 1:37 PM