I don't know where I'm a gonna go 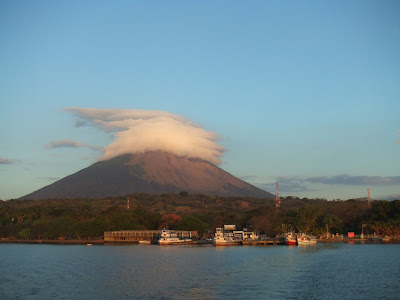 On the one hand, he offered to hook me up with some weed. On the other – through a combination of simple inexperience and what can only be termed sheer, unmitigated dumbfuckery – he almost got me killed, at least two dozen times, on the side of an active volcano.

No hard feelings, though. I suppose that's what you get for being that one-in-a-hundred tourist (i.e., jackass) who insists – demands – to be taken not just to the viewing area three-quarters the way up Volcan Concepcion like all the other good little sightseers, but to the motherfucking top. Like, looking-into-the-crater-and-inhaling-a-year's-worth-of-sulfur top.

After all, I paid 20 American dollars, damn it.

Usually when I visit a place or move somewhere new, I  wait a few days, maybe even a few weeks, before doing something deathly stupid. I'm old fashion: I need to settle down in to a place before I can feel comfortable risking the lives of myself and those around me.

After spending a wonderfully lazy two months on Nicaragua's Pacific coast living in the beach town of San Juan del Sur – if you ever visit, I'm the white guy who doesn't have dreads – I took the occasion of a friend visiting from the states to visit Ometepe, a volcanic island situated in the freshwater lake that dominates Nicaragua's geography. Consisting of two volcanoes, Concepcion and Maderas – the former still active – Ometepe is beautifully green even during the height of the dry season, with Capuchin monkeys as common as stray dogs.

If San Juan del Sur is a place where time slows down, then Ometepe is where it stops altogether – or goes to die, with the pace of life what Nicas would call “muy tranquilo,” or “slow as fuck” (not an exact translation). A typical day here is hanging with your family by the beach, swimming and catching fish that is then cooked into a soup renowned for its supposed ability to cure all that it ails you.

In recent years, tourism has picked up on the island, with the main town of Moyogolpa lined with hostels, bike rentals and pizza places. And why not? It's gorgeous. It's got monkeys and volcanoes. And, perhaps most importantly, beer is cheaper than water, though it tastes roughly the same.

With the pickup in the tourism industry, many locals have taken up jobs as guides, taking tourists, an unusual number from Germany and Canada, up the sides of its twin volcanoes.

Jesse, a rotund, jovial 29-year-old, was to be my guide. At an all-too early 6:30 in the morning, he and Miguel -- introduced as his "friend," which I later learned meant he wasn't an actual, knows what he's doing guide -- arrived at my hostel ready to kick some volcanic ass.

I had no idea what I was setting out to do. Nor could I have predicted that, over the next eight ours, Miguel would repeatedly – perhaps unknowingly, perhaps not – try to kill me.

I blame my friend. Just 40 minutes into what was to be an all-day hike, said friend called it quits, wheezing and heaving with a look of death upon his face. Unable to walk any further, he turned back with Jesse – the dude who knew what he was doing – presumably to find a nice cool, comforting place to die. As it turns out, his recovery was quick: despite not speaking a word of Spanish beyond “cerveza,” the asthmatic friend spent the rest of the day with Jesse the Guide biking, swimming and, so I hear, smoking copious amounts of Guatemalan ganja.

I, by contrast, spent the day battling to maintain my will to live. Dick.

At first hiking with Miguel was fine. Chill. Tranquilo. About 90 minutes after ditching mi amigo muerto, we reached a clearing – just beneath the clouds that envelop the top of the volcano – where you could enjoy a brisk breeze and a stunning view of the island and mainland Nicaragua. Next to us was a group of college-age German students talking German and whatever else it is German people do. This, I was later informed, is where 99 percent of people stop and turn around.

Not I. “Arriba,” I said, a look of disdain on my face for the mere mortals around me who would go through life never knowing what it is like to almost die on a volcano. “Arriba.” 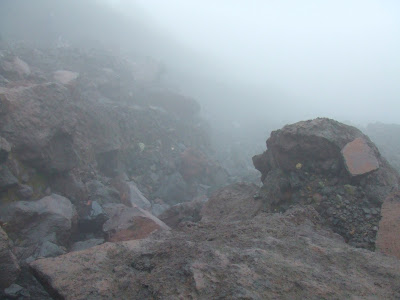 A half hour later I found myself climbing – not hiking – up the side of what felt like a foreign planet (a feeling exacerbated by my having watched too much Star Trek growing up), the crumbling, volcanic rocks disturbingly hot to the touch, all signs of life long since vanished. It was both fascinating and unsettling.

And then it started raining.

But hey, I can roll with the punches, thought your idiot narrator. And at least I'm with someone who knows where they're going. Right?

Another hour of climbing volcanic rock that tumbled down, nearly taking you with it, whenever touched, and we reached the crater – or rather, we got 10 feet below it. That's when my guide sat down, refusing to walk further and simply pointing to where I -- if I were so stupid -- could go to look over and into the sulfur-spewing lake of death. If I wanted (hint: don't do it). Why, I inquired? “Tengo miedo,” he replied. “Tengo miedo.” (I'm scared.)

After glancing into the sulfuric, cloudy abyss for about all of five seconds, a bit freaked out by my suddenly not so macho guide's fear – totally worth it! – we began the descent into my own personal hell.

Before the hike, I had heard going up to the crater was dangerous, “peligroso,” and that I really shouldn't do it. But then, I heard that from my guide, so I assumed he just didn't want to go all the way to the top, preferring to stop where those German tourists did so they could make it back home in time for American Idol. And while I may be stupid -- painfully so -- I ain't no sucker.

Or so I thought. As I discovered, if it's “dangerous” to climb up to the very top of Volcan Concepcion with nothing more than running shoes in the way of gear it's plain stupid -- like really, really you-fucked-up stupid -- to climb back down. 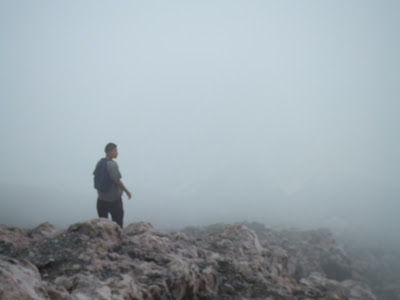 Thanks to the zig-zagging pattern we took going up and my guide-who-wasn't-really's unfamiliarity with the volcano, we spent the next four hours falling on our asses (by my count, at least 100 times between us) while engaged in the sort of death-defying jackassery that, though it didn't kill us, frankly should have prevented us from ever passing on our genes.

When I found myself overlooking a huge 100 foot drop in front of me, a 150 foot fall into a lava-formed river to the left of me and another 50 foot drop to right is probably when I first thought I might actually, for-real die. Though my guide coached me out of that position (I ended up having to retrace my steps and climb – and I mean rock-climbing wall climb – another 200 feet back up), I could only think, “Jesus, aren't you supposed to have equipment to do this shit?”

And then I saw one of the hooks drilled into the stone next to me that, you know, rock climbers use to tie their rock-climbing ropes to.

By the time, after 90 minutes of descent, we found ourselves on the wrong, barren side of the volcano – just 20 sloping feet away from a huge drop to Ometepe below – I had gone through about two dozen such near-death experiences. And not oh shit, I'm-asking-my-crush-to-homecoming scary, but like in a this-ain't-Disney-World-this-is-real-fucking-life, is-it-socially-acceptable-to-cry scary. The only comforting thought I had was that if I did in fact die on this rock, it would be an undeniably bad-ass way to go.

“So did you hear what happened to Charles?”

“He got his ass killed climbing a volcano in Mexico or some shit. And get this: they never found the body.”

*Spoiler Alert*: I didn't die. After several more hours of going up and down the side of the volcano (who was a total asshole, by the way), my guide – when not trying to inconspicuously whistle for help – repeatedly declaring “estamos cerca... estamos cerca," which, invariably, meant we were lost again. 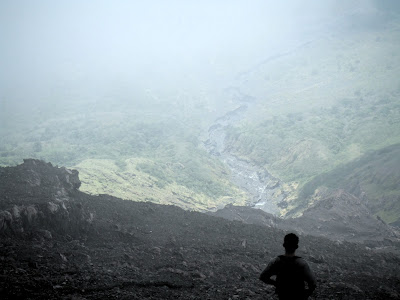 On our fifth (!) attempt down, we made it back to the trail, meaning we had just a measly four hours to go. And you don't know how happy that made me. Now if I were to die, it would be because I ran out of water two hours earlier, not because I tripped and bashed my head in on a rock, dying agonizingly slow as I waited for a helicopter that was not to come.

I found that comforting.

Finally in something resembling safety, my guide and I became more relaxed, only partly due to our mutual dehydration. After a brief discussion of acclaimed musical artists Cypress Hill, he pulled out the bag of weed that, I regret saying, I now believe may have been a contributing factor, if not the cause, of our four hours of wandering lostness. This brief respite was fatally tarnished, however, by the final, gut-punching insult of the day: he didn't have any papers.

What if I just made it look like the coconuts attacked him, I wondered. The perfect crime.

After annoyingly remembering my commitment to non-violence -- god damn principles -- I decided to spare Miguel. Not before winking at a coconut, though.

At least I learned a few lessons for the next time I get an asshole idea like "hey, let's climb a volcano" -- like, before you leave, make sure your guide is competent. And most importantly: bring papers.
Posted by Charles Davis at 5:11 AM