A lesson for Afghans from the healthcare debate 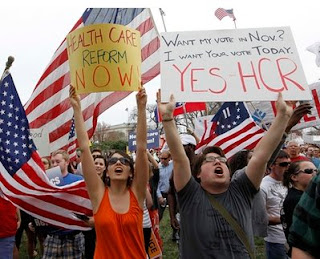 (credit: AP)
The Great Victory over the health insurance lobby now achieved with Congress' passage of a bill that mandates you buy the industry's products, inexplicably popular progressive blogger Matt Yglesias tells us "Barack Obama will go down in history as one of America’s finest presidents" -- barring, that is, some sort of "unrelated fiasco that mars his reputation" (presumably this means "blow job," not "unprovoked and illegal act of military aggression"). Democrats now in power, the victims of the U.S. government's imperial agenda of course no longer serve as useful fodder for the professional liberal class in Washington -- you can't blame their deaths on a bumbling and unpopular Texan, after all -- with Yglesias acting as if Obama's reputation has not already been stained with the blood of his drone strikes and the obsequious partisans at Daily Kos, who once upon time penned tedious 3,000-word jeremiads denouncing George Bush and the GOP for their killing of innocents abroad, now spending most of their days mocking Glenn Beck and praising their historic leader's historic-ness, happily relegating his illegal wars and troop surges to the dark recesses of their fawning, feverish minds.

To regain liberal sympathy, I offer a suggestion: the victims of Obama's wars in Afghanistan, Pakistan, Yemen, Somalia and Iraq should seek to qualify their respective nationalities as preexisting conditions. Or move to Darfur.
Posted by Charles Davis at 9:38 AM