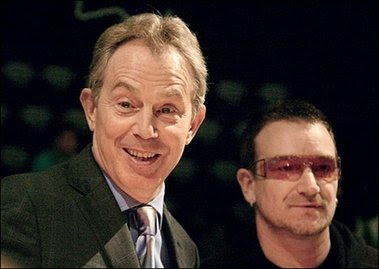 (U2 singer Bono, pictured right, coming to the aid of an unknown delusional man.)

Bono, the physical manifestation of all that is wrong with the world and the leader of some band called U2, has a column in The New York Times -- no seriously,  a column in The New York fucking Times, a followup to last week's op-ed from the Insane Clown Posse on the merits of a public option -- opining on that which is wrong in the world and how to make it right. As a rich rock star, one of the problems is obviously the internet and the power it gives people to make the enforcement of "intellectual property" laws an endeavor as laughably absurd as the intellectual argument for having them in the first place. As a great humanitarian, however, his argument is necessarily cloaked in the defense of the "fledgling songwriter" and the bus fare's worth of royalties they stand to lose out on because you don't feel like paying $18.99 for a Miley Cyrus album.

Rather than go on about by distaste for Bono, though, here's an article I wrote in college you can read that covers my feelings fairly well, subtly titled, "U2: The Word Band in the World?", the publishing of which in my school paper I'm pretty sure cost me an internship several years back with a major news company when the the woman interviewing me for the position turned out, to my great misfortune, to be a rather huge fan of the Irish rockers.
Posted by Charles Davis at 4:05 AM

Email ThisBlogThis!Share to TwitterShare to FacebookShare to Pinterest
Labels: Bono, Intellectual Property, U2