My conversation with Iranian state television

A week ago I published a satirical article on this blog, “EXCLUSIVE: Obama orders air strikes on Guantanamo Bay,” intended to highlight the absurdity of people (I'm looking at you establishment liberals) condemning the Gitmo military prison and the government’s denial of habeas corpus to the “suspected terrorists” imprisoned there (and the others even the Obama administration concedes are innocent but whom they won’t release) while condoning extrajudicial killings by U.S. Predator drones in Yemen, Iraq, Somalia, Afghanistan and Pakistan. This being the internet, that the piece is satire was of course lost on some, which probably says more about what people believe the U.S. government is capable of than anything else.

One such person is “Sarah”, employed by the Iranian government’s English-language news/propaganda service, Press TV, who emailed me yesterday with the subject line “Interview Request” after the piece was published over at Dissident Voice. Now mind you, the second paragraph of my piece quoted a supposed “senior White House official” as stating that the attack “killed a whole damn bunch of them there terrorist sons of bitches” -- “the sound of clinking glasses and celebratory gunfire audible in the background.” Further, the next paragraph said the men imprisoned at Guantanamo were there because they “were suspected of being Muslim” (well…) and having “maintained an interest in recruiting sheep to be suicide bombers.” Sheep. In other words, there were ample signs, I think, the piece was satirical -- in addition to it being categorized as “satire.”

With that in mind, here’s the email I received:

This is Sarah, Press TV's newsroom coordinator. Press TV is an English News channel being broadcasted from Iran. we just saw one of your articles "EXCLUSIVE: Barack Obama orders air strikes on Guantanamo Bay killing at least 220 detaineees" on the net. Would we be able to get you on the phone for an interview on this story? i would really appriciate it if you reply back soon and give me your contact number.

Being a bit of an asshole, I of course responded by sending my Google Voice number. About five minutes later I received a call from “Sarah” in Tehran, who conducted a fact check of my piece consisting of the question: “Is it credible?” Again, being a bit of an asshole, I assured her my sources were second-to-none and that the credibility of the piece was not in doubt, prompting her to invite me to appear on *LIVE* television in an hour. I naturally accepted. You should probably just listen to the conversation yourself:

A few minutes later I received another email from Sarah, this one in preparation for my coming appearance:

charles would you mind sending a brief profile about urself as well along with the pic, thanks

I quickly complied, sending along this bio -- “Charles Davis is a journalist based in Washington, DC, where he covers U.S. foreign policy. His work has appeared in highly credible publications throughout the world.” -- and this picture. 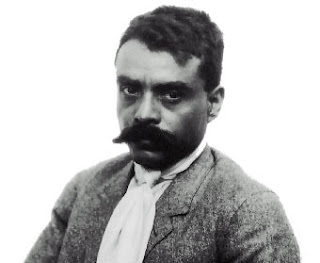 For those unfamiliar, that’s Emiliano Zapata, a prominent leader in the Mexican revolution, an advocate of land reform and decentralization, one of my idols for actually turning down political power rather than trying to seize it for himself (see a paper I wrote about him in college), and, as you can see, an all-around mustachioed badass. Unfortunately, I was informed that “it seems we can use black and white pics for the documentaries but only allowed to use colored pics for the live shots like news, let me see what happens…” This did not dissuade the folks at the Iranian regime’s international mouthpiece from persisting in their effort to get me on the air, though:

can we have u at the studio maybe? one of our studios is on M street in WDC, like around 9pm?

“Holy shit,” I thought, wondering how the hell I could pass myself off as a 90-years-dead Mexican revolutionary. I would also need to concoct a story -- and concoct I did, penning a tale of a CIA carrier pigeon “going rogue”, refusing to carry out its mission to inform the drone operators in Langley, VA, of their assignment to bomb Guantanamo Bay and instead flying to my apartment to spill the beans on the imminent attack, coming to me due to my “longstanding ties to the dissident carrier pigeon community.” Alas, YouTube stardom was not to be as Sarah apparently wisened up before I could tell my story on the air -- presumably because she read my Twitter feed -- never responding to my request for directions. Sigh.
Posted by Charles Davis at 2:08 PM