Amid record poverty, Jerry Brown pays down the debt 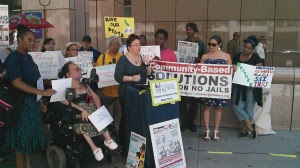 California Governor Jerry Brown said on Tuesday that he had some some “good news” for his state: tax revenue for the year was going to be way up, meaning he was revising his budget plan and announcing $2.4 billion in additional spending. But a day later, a couple dozen community activists braved 99-degree heat in downtown Los Angeles to say they were outraged by what he was spending that money on: while half of it will cover the cost of higher than expected enrollment in the state's health insurance program, the liberal governor said he mostly wants to just to bolster state pensions and pay off debt.

The $107.8 billion budget plan that Brown revealed on May 13 sees the state increasing its commitment to paying off its liabilities and “saving for a rainy day,” with millions of dollars set aside for a fund to be tapped in years there are budget deficits. While some Democrats in the legislature have pressed for things like universal preschool, Brown said now is not the time to being investing in social programs.

"We've done a lot already, and we haven't paid for what we've already done,” Brown explained at a press conference. That won praise from Senate Republican Leader Bob Huff, who said he was “glad to see the governor is continuing to prioritize fiscal responsibility.”

Outside the Ronald Reagan State Building in LA, community activists said Brown should have used the surplus to refund social programs that were slashed after the 2008 financial crisis. The state has 8.7 million people living under the official poverty line, 2 million of them children – people who have not shared in the modest economic recovery.

“He completely ignored the people in California, the children, who are living in poverty and suffering in poverty now,” said Nancy Gomez of the advocacy group Health Access California. Between 2011 and 2013, for instance, the number of people living on the streets of Los Angeles, increased by an estimated 67 percent. “Those people can't wait for a rainy-day fund. For them, it's already raining.”

Others said that if austerity is going to be justified in a year of surplus on the basis that California needs to first pay off its debt, then it shouldn't be spending half-a-billion dollars to build new prisons and jails.

Diana Zuniga, an organizer with Californians United for a Responsible Budget (CURB), said that as the child of an incarcerated person she was “appalled” that the governor wants to spend $500 million on jail construction and an addition $11 million on new prisons.

“I am tired of the governor prioritizing prison and jail spending,” said Zuniga. “There's a small amount of money that is going to reentry programs” – $49 million – “but we know we don't need more jail cells, more prisons, to be constructed in our communities.” Overall, the proposed state corrections budget is $9.8 billion, an increase of 2.9 percent over last year.

In 2011, the Supreme Court ruled that conditions in California's prisons were so bad it constituted cruel and unusual punishment, maintaining that the only solution in the light of the state's failure to address the problems was to simply let people go. A lower court had previously ruled that California must release 33,000 people from its prisons, noting as an “uncontested fact” that, because of their limited access to health care, “an inmate in one of California’s prisons needlessly dies every six or seven days.”

Brown has been doing everything he can to not comply, recently winning a two-year extension of the court-imposed deadline for reducing California's prison population to 137.5 percent of capacity – down from nearly 200 percent – and he has proposed spending California's “emergency fund” on shipping some of its inmates to private prisons out of state. In January, the state Department of Corrections and Rehabilitation admitted that the prison population is actually headed in the wrong direction, with it projected to grow by 10,000 over the next five years to over 140,000 people behind bars (compared to 60,000 in 1986).
Rather than simply release, for example, nonviolent drug offenders who have served the majority of their sentences, Brown and state lawmakers have opted instead to send most inmates to count lockups, which are themselves overcrowded. Men's Central Jail in Los Angeles, the largest in the state, is so overcrowded that an official with the ACLU described it as “the most nightmarish place I've seen,” with thousands of men suffering from mental illness “packed liked sardines in dungeon-like barracks.”

Los Angeles County has responded to the influx of inmates by proposing to spend $2 billion on new jails. At the rally on Wednesday, activists with the No More Jails L.A. Coalition passed out a statement noting that half of those in county jail are awaiting trial – people who are innocent until proven guilty – while 60 percent of those who have been convicted were convicted of non-violent offenses. With tax revenues up, local and state politicians have proposed building more human cages, with Democrats like Republicans demanding “no early release,” though the state has at last, begrudgingly, begun an elderly parole program.

She might have asked another question, too: Where are all the journalists? The Associated Press listed Wednesday's rally in its roundup of news events in Los Angeles, used by reporters to determine what they are covering that day, but no members of the press were there.
Posted by Charles Davis at 9:48 AM