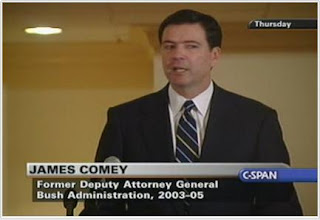 President Obama is reportedly picking a former hedge fund executive turned senior Bush administration official at the Justice Department by the name James Comey to be his next head of the FBI. Like Chuck Hagel, this largely meaningless nomination in terms of actual policy is being played up as meaningful by the hacks whose job it is to do that sort of thing.

Forget the pundits. Here's what the nomination means, if anything, by way of remarks Comey made at a press conference in 2004:


Had we tried to make a case against Jose Padilla through our criminal justice system, something that I, as the United States attorney in New York, could not do at that time without jeopardizing intelligence sources, he would very likely have followed his lawyer's advice and said nothing, which would have been his constitutional right.

He would likely have ended up a free man, with our only hope being to try to follow him 24 hours a day, seven days a week, and hope -- pray, really -- that we didn't lose him.

Trials can be so inconvenient, especially when the criminal justice system only affords the state a 93 percent conviction rate. You really don't want to take any risks when it comes to national security. Indeed, "We could care less about a criminal case when right before us is the need to protect American citizens and to save lives," Comey told reporters, presumably grabbing his genitals. "We'll figure out down the road what we do with Jose Padilla." His remarks mean he will do well at the FBI, that Comey, leading a department where protecting Americans has long served as justification for ignoring their rights.

Padilla ended up being labeled an "enemy combatant" and stashed away in a Naval brig, spending nearly four years in solitary confinement, which in the words of a psychiatrist who examined him led to the "destruction of a human being’s mind.” Despite his years spent being tortured in military custody, however, Padilla was ultimately tried and convicted within the civilian criminal justice system. A final punch to the gut, because this America and we are terrible: the mentally destroyed Padilla's original conviction of 17 years in prison for expressing an interest in (if not actually engaging in) violent jihad was overturned for being too lenient.

(Transcript via Kevin Gosztola)
Posted by Charles Davis at 11:47 PM