Each week, we at BrandX pore over all the weird, horrifying and occasionally sexy stories the world has to offer in a quest to make weird, horrifying and occasionally sexy observations about the world in which we live. Often these stories involve butts or some form of penetration – the jackpot is both – and very often they are silly. But often enough, they're only silly in a superficial way; once you dig a little bit, you find there's actually something serious going on.

Take this story out of New Hampshire: 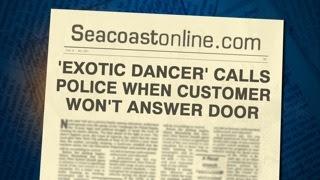 According to the report, a “woman who described herself as an exotic dancer” called police “when a resident ordered a dance, but refused to answer his door when she arrived.” The hilarious thing is that, instead of helping the working woman in question, police mocked her.

“She never danced, so I would be hard pressed to say it was theft of services,” said very funny local police chief Mike Schwartz, who presumably has a podcast. “Now if she was a professional doorbell ringer . . . .”

Wipe the tear from your eye and, just for a moment, imagine you're the woman in question. Maybe the rent's due in a week and you're coming up short. Maybe you have some student loans to pay off. Maybe you have a kid. Maybe you're just like millions of other Americans: working a shitty job so you can pay the utilities on time. But thanks to a client who ordered your services but gets cold feet, instead of getting some extra cash in your g-string, you've just wasted two hours and a gallon of gas. Distressed, you do something stupid: you call the police, thinking they might help.
Instead: “I guess there are some people who would have a better dance than others,” the local sheriff tells the press. “Maybe you were expecting Mikhail Baryshnikov and you got someone looking like Mike Schwartz. I wouldn't answer the door either.”

Know why that's funny? Because the woman in question isn't an opera singer or a plumber or a wedding DJ, in which case ordering her services and then failing to pay for them would indeed be viewed as a crime without controversy. No, she works a job that makes people smirk. She's just a stripper; just a woman who “described herself as an exotic dancer.” And there's no need to show much respect to a person like that, the subtext goes.

What the headline ought to be: 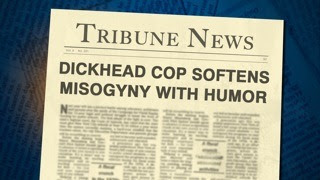