This is Fabio Gadea, a 79-year-old radio businessman campaigning against the incumbent Daniel Ortega to be the next president of Nicaragua: 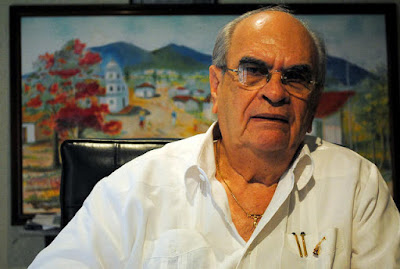 Running on the ticket of a splinter conservative political party, Gadea's odds of winning are rather slim, especially in light of the FSLN's huge institutional advantage -- the country is decked out in the Sandinista's red and black flag (co-opted, interestingly enough, from the anarcho-syndicalists) -- and the fact a former president and fellow conservative is also running, splitting the opposition vote. Given this stark reality, how can a man nearly eight decades old appeal to voters in a country with one of the youngest populations in the Western Hemisphere?

With this, his official campaign song. It might sound familiar:

I've never been a fan of the Black Eyed Peas, but even I didn't believe they could cause so much harm -- not just to music, but to global politics.