On 'supporting the troops'

Playing today in the 2011 Women's World Cup, the American national team chose to celebrate their first goal by hailing -- er, saluting -- the hundreds of U.S. soldiers in attendance. 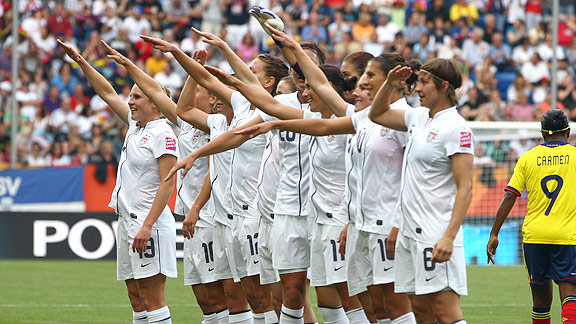 No other country on Earth, barring perhaps North Korea, worships its military in such a prevalent, mindless and such seemingly oblivious fashion as the good 'ol USA. To wit, sportswriter Adrian Wojnarowski on Twitter today thanked "our troops and veterans" for all of their "sacrifices: past, present and future," as if one's gratitude toward professional killers shouldn't be based on, say, the actual specifics of and toward what end they are professionally killing. Repelling an alien invasion? Praise away, I guess. Invading and occupying Iraq -- or Iran? Not so much.

It serves no one any good, especially 17 or 18 year olds who may be considering enlisting, to idolize military "service," particularly when soldiers are killing and being killed not in the name of freedom, but in the service of empire and corporate power. People might mean well when they salute or tweet their thanks to Our Brave Young Men and Women -- or it just might be self-serving, flag-draping political bullshit -- but by doing so they're only perpetuating the dangerous notion that there's anything honorable about the U.S. military.

A final, noteworthy detail upon which I will not comment any further: That women's soccer game where the players did the whole creepy, right-arm raised "salute"? It was played in Germany.