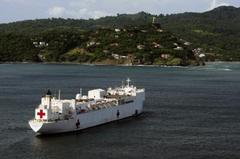 The last time U.S. forces were in San Juan del Sur it was 1984 and they were attacking the tourist town, the largest on Nicaragua's Pacific coast, and mining its harbor. This time around, their presence is a little more benign, with the USNS Comfort providing free medical care to the locals as part of its "Continuing Promise" tour of Latin America.

As far as branding efforts go, I'm glad the managers of the American empire chose to offer free surgeries instead of, say, bombarding my adopted home town with the full might of the U.S. military's liberating firepower. And assuming they aren't doing the sort of medical experiments they freely provided to hundreds of Guatemalans, I suppose I'm okay with all the uniformed U.S. military personnel at local bars and restaurants, even if that very sight was one of the reasons I left Washington, DC.

Based on the security presence in town, however, you wouldn't think U.S. forces were here on an uncontroversial humanitarian mission, that they were in a tranquil tourist town in a peaceful country as opposed to a hotbed of anti-Americanism in an active war zone. Walking by a restaurant the other day, I noticed a Nicaraguan soldier armed with an automatic weapon keeping guard outside the entrance. On the inside? Just some American soldiers enjoying steak and ribs.

I can't say who requested the security, though I imagine it's a safe bet the Americans did, but its presence raises a key point: one would have to be extremely paranoid or suffering a serious P.R. problem -- or both -- if you fear people may try to shoot or blow you up as you provide free medical care to poor people. Free surgeries are great and all, but they don't wash away the memories of (counter-)insurgencies, past and present.