In late 2009, The Washington Times published an exclusive piece by national security reporter Eli Lake that made a sensational claim: Trita Parsi, head of the National Iranian American Council (NIAC), was acting as unregistered foreign agent on behalf of the regime in Tehran. The charge, picked up by all the usual suspects in the neoconservative press, was as convenient as it was stunning: Parsi had given lectures to the CIA and met with top American officials to discuss his belief that engagement with the Iranian government was preferable to sanctions and military action.

Parsi's views made him a target of right-wing hawks. Middle Eastern expats living inside the Washington beltway are supposed to help sell wars, after all, not campaign against them.

Lake's evidence that Parsi was acting "as an agent of a foreign power, in this case . . . Iran," as he quoted former FBI official Oliver Revel? The smoking gun that would cause a former FBI special agent to tell Lake that, "Were I running the counterintelligence program at the bureau now, I would have cause to look into this further"? The exclusive document showing Parsi's "lobbying has secretly been more for the Islamic Republic,” in the words of another quoted source? Nothing more than an e-mail from Parsi to an Iranian diplomat congratulating the latter on meeting with a House Republican and noting that other lawmakers may be interested in a meeting as well.

No bank statements showing Parsi's group received funding from Tehran. No pay stub from the ayatollahs. Nothing, really.

A year and a half later, you'll no doubt be surprised to learn, Parsi is a free, unindicted man. Chalk another one up for neoconservative "journalism."

To mark Parsi's curiously continued freedom, I took to Twitter to ask Lake about it, curious how he would spin it. His response was novel. 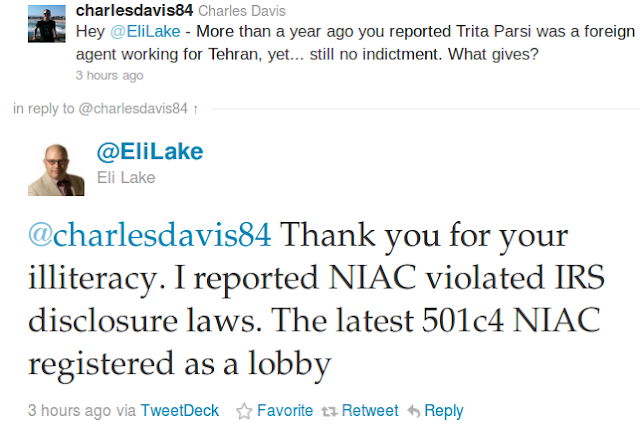 That's right: the same reporter who stacked his piece with damning quotes from law enforcement officials suggesting Parsi was an agent for Tehran, adding as the only caveat that "the case is not definitive," now, a year and a half later, won't even acknowledge he made the claim. Instead, Lake suggests his November 2009 piece -- picked up by the likes of former George W. Bush speechwriter David Frum, who said it raised "real questions" about which country Parsi was really working for -- was but a ho-hum look at whether NIAC filled out the write tax forms.

That whole unregistered foreign agent serving the tyrants of Tehran bit -- the part that got the piece cited by every major conservative outlet as proof those who disagreed with them on U.S. policy toward the Middle East were, as they long suspected, evil sons of bitches of dubious loyalty? Eh, um, *clears throat*, well I . . . you're stupid.
Posted by Charles Davis at 3:10 PM