The militarization of law enforcement

While reading a news story this week about the tragic murder at Wesleyan University, I came across this rather interesting picture: 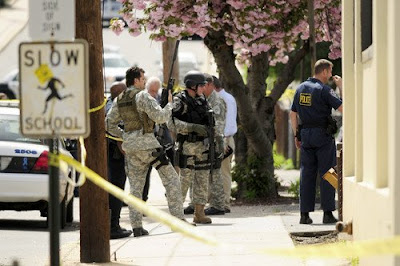 The caption insists the photo is of "Middletown police and Wesleyan University security", which perhaps makes it even more disconcerting to see them decked out in military garb, yet further evidence of the militarization of U.S. law enforcement -- a trend made more disturbing by the number of cops that have served in the military or are in the reserves, and one accelerated by the bipartisan fondness for adopting the language -- and tactics -- of war to fight illicit drugs.

Unfortunately, outside of a few paranoid "rule of law" types, there doesn't seem to be much of an outcry over military-style police forces, the public perhaps conditioned to images of military occupation from years of CNN and the "war on terror". This bumper sticker photographed by Radley Balko captures much of the problem:

Once again, cops aren’t soldiers. American cities aren’t battlefields. And U.S. citizens aren’t potential combatants. This isn’t pedantry. It’s about the mentality with which police officers approach their job, and about what sort of relationship they’re going to have with the people whose rights they’re supposed to be protecting.