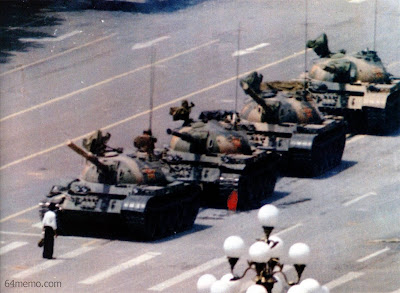 (Nominee for the National Intelligence Council Chairmanship Chas Freeman drives a tank toward a protester in Tiananmen Square)
President Obama's reported pick to head the National Intelligence Council (NIC), former ambassador to Saudi Arabia Chas Freeman, has been praised by critics of U.S. foreign policy for being one of the few Obama foreign policy appointees who isn't a crazed, warmongering Likudnik. Indeed, Freeman has been pilloried by all the usual suspects -- like indicted AIPAC spy Steve Rosen -- for his outspoken denunciations of the Iraq war and the "bipartisan consensus" that enabled it. As Jim Lobe writes, "He doesn't pull punches," and barring the nomination of Noam Chomsky as Secretary of State, he seems about as good a foreign policy pick as one could expect out of the U.S. government.

Unfortunately, opponents of the Freeman pick, like The Weekly Standard's buffoonish Michael Goldfarb, have uncovered the would-be NIC chairman opining on the 1989 Tiananmen Square protests and the Chinese government's response to it. Now, if you're a normal human being (i.e. not a respected American foreign policy official), you probably think that the Chinese state was and continues to be nothing but a vicious, oppressive gang termed a "government" because it has the biggest and baddest weapons. But if you're Chas Freeman, you believe the Chinese government is a bunch of appeasing, limp-wristed pansies who have been all too forgiving to their subjects:


. . . the truly unforgivable mistake of the Chinese authorities was the failure to intervene on a timely basis to nip the demonstrations in the bud, rather than -- as would have been both wise and efficacious -- to intervene with force when all other measures had failed to restore domestic tranquility to Beijing and other major urban centers in China. In this optic, the Politburo's response to the mob scene at "Tian'anmen" stands as a monument to overly cautious behavior on the part of the leadership, not as an example of rash action.

For myself, I side on this -- if not on numerous other issues -- with Gen. Douglas MacArthur. I do not believe it is acceptable for any country to allow the heart of its national capital to be occupied by dissidents intent on disrupting the normal functions of government, however appealing to foreigners their propaganda may be. Such folk, whether they represent a veterans' "Bonus Army" or a "student uprising" on behalf of "the goddess of democracy" should expect to be displaced with despatch from the ground they occupy. I cannot conceive of any American government behaving with the ill-conceived restraint that the Zhao Ziyang administration did in China, allowing students to occupy zones that are the equivalent of the Washington National Mall and Times Square, combined. while shutting down much of the Chinese government's normal operations. I thus share the hope of the majority in China that no Chinese government will repeat the mistakes of Zhao Ziyang's dilatory tactics of appeasement in dealing with domestic protesters in China.

Reading this generously -- very generously -- one could argue that, well, at least Freeman grants the Chinese state the same right to repression his comrades in the U.S. government undoubtedly believe they are entitled to. That is, when it comes to brutality and unchecked state power, Freeman's no American exceptionalist.
On the other hand, Freeman's bemoaning of the "ill-conceived restraint" of the Chinese government -- the same government that, according to the Chinese Red Cross, killed roughly 3,000 people at Tiananmen Square -- is nothing if not monstrous. Why, how dare those Chinese protesters upset the "normal functions" of the Chinese government by protesting in favor of silly things like human rights and basic liberties, Freeman writes, showing just how far removed those who would presume to lead us are from basic norms of human decency.
This is an important fact to keep in mind: that while some members of the foreign policy establishment may be better than others, when held against the same moral standards you or I are held to in our daily lives, they are nearly all psychopaths. Strip away all the ex post facto rationalizations for the state (see: the "social contract") and one begins to realize we're ruled by a gang of fools, charlatans and criminals that just so happen to have a bunch of guns and tanks to back up their proclamations and edicts. That Chas Freeman is one of the good guys, relatively speaking, is a pretty good indication of this.
Posted by Charles Davis at 7:07 PM