You'd be laughing too 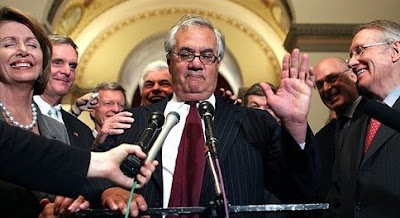 In this instance, a picture truly is worth a thousand words.
The U.S. Congress, just as it did in the lead up to the invasion of Iraq, appears set to grant the Bush administration everything it wants in response to a phony, manufactured "crisis" being drummed up by the same corrupt politicians and businessmen that assured the American public that, soon, everyone could have a McMansion and a endless supply of easy credit. And brazenly enough, the $700 billion bailout -- which, sorry, Obamaphiles, pretty much rules out any fancy new social programs -- is being openly crafted by this very same incompetent elite that ran their companies -- and this country -- into the ground and that stand to gain the most from this massive transfer of wealth:

Sept. 28 (Bloomberg) -- Treasury Secretary Henry Paulson will have broad authority to hire financial managers quickly to help manage a $700 billion asset-purchase plan, according to the draft legislation under consideration.

The bill would allow the Treasury chief to waive federal acquisition procedures ``where compelling circumstances make compliance contrary to the public interest,'' according to a summary of the draft law. The Treasury would have to notify Congress of such waivers within seven days, and also ensure procedures are in place to reach out to minorities.

If the plan is enacted, the Treasury likely will need a lot of Wall Street expertise to manage the assets it acquires, said Tim Ryan, head of the Securities Industry and Financial Markets Association. Ryan also is former director of the Office of Thrift Supervision, which oversaw the Resolution Trust Corp., the agency that liquidated failed thrifts after the savings-and-loan crisis of the 1980s.

Paulson has already recruited from Wall Street to help manage the current financial crisis, the worst since the Great Depression. He hired Morgan Stanley on a $95,000 contract awarded under emergency procedures to help assess options for Fannie Mae and Freddie Mac, the mortgage companies that ultimately ended up in government conservatorship.

I could be wrong, but to me this all sounds an awful lot like this:

Corporate Statism is an approach to state organization, the likes of which Othmar Spann, Benito Mussolini and others are credited with developing. Corporate Statism involves the ruling party acting as a mediator between the workers, capitalists and other prominent state interests by institutionally incorporating them into the ruling mechanism.

Essentially, corporatism is rule by a political and economic elite, with nominally "private" corporations working hand-in-hand with the state for the benefit of the well-connected capitalists and politicians at the top. But, as Wikipedia assures us:

However, both in academia and practice, Corporate Statism (or Corporatism as it is also sometimes known) has fallen out of favour.

Yeah, someone might want to rewrite that.
Posted by Charles Davis at 9:26 PM

Email ThisBlogThis!Share to TwitterShare to FacebookShare to Pinterest
Labels: Corruption