Remember that anti-drug Super Bowl from a few years ago? The one that claimed smoking a joint was equivalent to giving arms to al Qaeda (you know, kind of like the Reagan administration did)? Well, as Israeli newspaper Haaretz reports, in addition to adopting such long-time U.S. policies like extrajudicial killings and ill-conceived and disastrous military actions, officials in Israel have also co-opted American drug war propaganda:

As part of the campaign, the authority has published a poster showing the Hezbollah leader emerging genie-like from a bong (a waterpipe commonly used for smoking marijuana and hashish).

The picture, as one would imagine, is ominously hilarious: 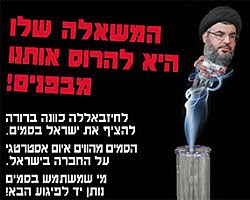 But as the story explains, the text is even more ridiculous:

Underneath the image, the poster reads: "Hezbollah is clearly planning to flood Israel with narcotics. Narcotics pose a strategic threat to Israeli society. Whoever uses narcotics is giving a hand to the next terrorist attack." [emphasis mine]

The Israeli media last week quoted senior Israeli security sources as saying that Hezbollah is planning to flood Israel with drugs in an effort to harm its citizens.

Subtle, right? Of course, the typical anti-drug ads are about as clever and nuanced as an Axe body spray commercial -- but instead of preaching about how drugs will get you laid, they tend to mention how smoking a joint will lead you to either kill your best friend or fly a plane into the Twin Towers.

And you have to love the fact that Hezbollah is allegedly trying to undermine Israeli society with really good pot. What, are they hoping the Israeli Defense Force will be too stoned to carpet bomb Lebanon again?

Naturally, what's never mentioned is that the huge profits Bad People make from the illegal drug trade are a direct result of their illegality. Consider how farmers in Afghanistan grow opium, not hops. Funny, that.

It couldn't be because opium is artificially scarce and thus worth exponentially more on the black market, could it?

But back to the Israeli ad. Anyone care to guess what type of bong Osama would use? Discuss.

Posted by Charles Davis at 4:19 PM

Email ThisBlogThis!Share to TwitterShare to FacebookShare to Pinterest
Labels: Israel/Palestine, War on Drugs