Apparently the U.S. State Department maintains a blog entitled "DIPNOTE," a name that, shall we say, lends itself to some ridicule.

But that's not why I'm mentioning it. I just so happened to visit the site earlier today when I stumbled across the following "Question of Week":

Lots of polls show that foreign publics have a poor opinion of the U.S. Some people argue that this means the U.S. should change its policies to make them more popular outside the U.S. Others contend that foreign policy decisions need to reflect U.S. national interests, irrespective of their popularity.

Does the popularity of United States matter and should it affect policy decisions?

I could write a rather lengthy, pretentious post explaining, in detail, why foreign opinion of the United States matters ever so much. Instead, I'd like to just point out the picture that the U.S. State Department chose to represent the United State's unpopularity abroad: 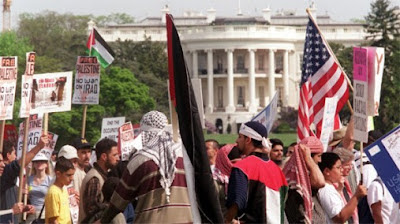 Now, obviously the protesters in this picture are in front of the White House, which last time I checked was firmly entrenched in these here United States. A conspiracist might ask, is the State Department saying anti-war protesters aren't Americans?! But that's not the angle I want to take. Rather, I think the picture points out the ridiculousness of the question's premise. I mean, why should the opinion of foreigners have an impact on U.S. foreign policy when clearly the opinion of Americans doesn't matter? After all, Democrats took over Congress in 2006 due in large part to the American public's unhappiness with the war in Iraq. So what happened? President Bush sent more troops there -- and Congress continued to appropriate hundreds of billions of dollars for a war most of its members claim to oppose. But don't worry, the 2008 election is already shaping up to be the Most Important Ever. And this time things will really change.