How I could just bite a man

A few months back, my dog bit an old gringo in Granada, a colonial city in Nicaragua popular with old gringos, many of whom one can't help but think are here largely because there's no extradition treaty with the United States. I don't want to spin this: it was bad thing. My dog, the cuddly bastard, was a very bad dog. A very bad dog. 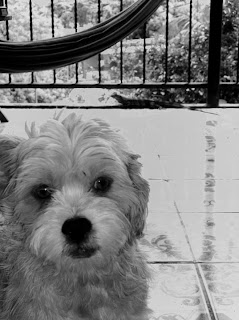 The thing is, my dog is maybe 20 pounds soaking wet -- and given a choice in the matter, he'd never be soaking wet because, while he puts on a tough act, large bodies of water frighten the little guy. Though he has a big dog's bark, he does not have the bite to actually back it up. Like a canine Victor Davis Hanson, but with less metaphorical blood on his paws.

So while, again, my dog biting an old man can't be spun as an okay thing to do, in my opinion a bite from a little Lhasa Apso that doesn't so much as leave a mark didn't warrant the response it received: the old gringo screaming "you fucking asshole" at me over and over in the middle of a crowded cafe. A curt "watch your fucking dog, man"? Yeah sure, that's fine. I get it. Let the steam out and let's move on.

Now, as a person who sometimes struggles with embracing deescalation tactics when I'm personally involved in a conflict -- follow me on Twitter! -- I probably didn't handle the situation as well as I should have. Already having a strong bias against all the old creepy white men in Nicaragua whose legions I am destined to someday join, I decided quoting the breed profile back to the man would be a fun thing to do: "He probably bit you because he's a very good judge of character," I said. "He could probably tell you're a shitty person." I believe I also made an ageist comment regarding hips and the relative chance of my breaking mine compared to him breaking his.

Was I right to say that? No, of course not. Did it feel right saying it? Of course it did.

And that brings me to something that, thanks to the mental clarity provided by Flor de Caña, hit me last night like a bag full of Lhasa Apsos: this guy is my new neighbor in San Juan del Sur -- "new" as in I've been living right next to him for the past month now. This perhaps explains why I have not been able to get so much as an "hola" from him. As I told my dog after I got home from the bar, equipped with an ephiphany and a buzz: at dawn we finish this.
Posted by Charles Davis at 11:38 AM