Dana Rohrabacher: Lying now or then?

Back in 2002, California Republican Dana Rohrabacher was an outspoken advocate of invading Iraq, the sort that claimed it was improper to even label the impending invasion a "war" because it was really more of a liberation, one for which the Iraqi people would be so grateful they'd be "dancing in the streets waving American flags just as the people of Afghanistan still are grateful to us for freeing them." When that gratitude predictably failed to materialize -- it's hard to really let loose and celebrate when you're busy making funeral arrangements for family members liberated from their corporeal existence -- Rohrabacher, rather than engage in any sort of self-reflection, labeled Iraqis ungrateful and famously demanded they foot the bill for the destruction of their country.

Nowadays, Rohrabacher is busy revising his pre-war stance in an effort to make him look less like a dishonest warmonger. On Twitter, he confesses that he never really believed all that malarkey about weapons of mass destruction and existential threats to America's consumerist way of life. Not at all! His support for a war that directly killed upwards of 150,000 Iraqi civilians was all about Freedom, he says: 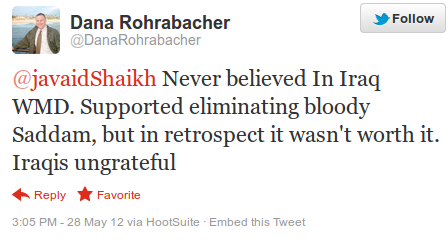 And, in case that wasn't clear enough: 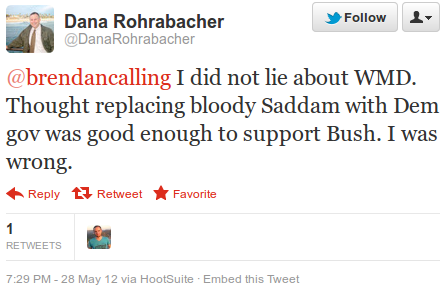 Except, gosh -- and this is the kicker -- he didn't let the American people in on his little secret back before the war started. When it mattered. Here is Rohrabacher on the floor of the House of Representatives back in October 2002:


We're not declaring war on Iraq. We are declaring that Saddam Hussein must go. And Saddam Hussein must go for the sake of the people of Iraq and for the sake of the safety of our people. And let me note this, rebuilding Iraq will be much easier than building Afghanistan. Iraq has enormous resources that have been channeled away by Saddam Hussein to develop chemical and biological weapons and to develop nuclear weapons. Those billions of dollars can be put to use to build a better Iraq. And the people will applaud us for helping them with that end. No, this is much easier than the job in Afghanistan. Yet we have the naysayers among us who would lead us in the other direction.

Translation: I don't deny that I lied before Congress and the American public in a major floor speech on the eve of a decision to go to war. But other times I didn't!
Posted by Charles Davis at 6:46 PM