The face of modern liberalism 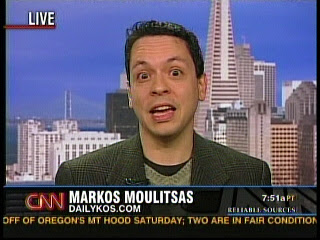 Markos Moulitsas is the founder of Daily Kos and self-satisfied leader of the left-leaning "Netroots" community of bloggers, best characterized by their fervent devotion to the perpetual process of electing "more and better Democrats." When not helping raise money for the same party that endorses locking up hundreds of thousands of Americans for non-violent drug offenses -- and whose rule has brought us progressive achievements like the surge in Afghanistan and the official policy of killing citizens without so much as a judicial rubber-stamp if they travel to sufficiently swarthy countries and associate with the natives -- Moulitsas is busy enforcing Democratic orthodoxy and party dogma, his latest threat of an ineffective primary challenge coming against poor old Dennis Kucinich* for the sin of failing to endorse the White House and congressional leadership's corporatist, pharmaceutical-insurance-complex-boosting joke of a health care reform bill.

"[I’m going to hold] people like Dennis Kucinich responsible for the 40,000 Americans that die each year from a lack of health care," Moulitsas declared on MSNBC this week. Tough words. Now, here's who he promised to support primary challenges against after 189 House Democrats voted to extend the war in Afghanistan, against a measure offered by the dastardly Kucinich, thus ensuring NATO forces will continue killing Afghan civilians at a healthy pace: ____________. That silence is a reflection of an awful strange and morally dubious set of priorities.

Liberals being so proud of their cosmopolitan, humanitarian credentials, in their minds standing in stark contrast to those neanderthal, SUV-driving Republicans, one would imagine they'd place a little more priority on their politicians, you know, not killing poor foreigners in multiple countries with which the U.S. is not even officially at war, and a little less on mandating that all Americans purchase the appropriately demonized health insurance industry's products (idea for solving starvation in the developing world: mandate everyone buy food!). Question the wisdom and morality of that, though, and prepare to face the nastiest epithet a good party-line Democrat can conceive of: Naderite. Hell, it's even worse than being called a Tea Bagger to folks like Moulitsas, defensive tirades and smug derision the immediate reaction toward anyone who dare whisper the long-time consumer advocate's name. Ralph Nader is to Democrats what Judas is to Christians -- partisan politics being very much a religion, sharing all the idolatry and corruption but, unfortunately, neither a hint of grace nor beauty.

As Moulitsas explains it, Kucinich's opposition to the health care bill is "very Ralph Nader-esque" -- you can almost see Josh Marshall mouthing "buuuurn!" As often the case with religion, politics promotes a narrow-minded view of the world and its possibilities, one fraught with internal contradictions like the Democratic tendency of blaming Nader for eight years of George Bush when most Democrats supported and are currently institutionalizing the worst excesses embraced by the former president. To committed partisans, however, the failure of the Democrats to enact the supposed Democratic agenda has only one obvious solution: elect more and better Democrats. Take Moulitsas' smug and revealing "tweet" to those who question singling out Kucinich for condemnation and not the awful health care bill -- to say nothing of the Democrats voting for more war in Afghanistan: "What I'd really like to know is how many Kucinich-bots have contributed to Bill Halter in Arkansas. But that would be DOING something..."

It is kind of a cute, in a way, that a glorified online fundraiser who attacks non-partisans with venom and obscenity usually reserved for Holocaust-deniers and Republicans thinks he has an impact on policymaking, and believes this to be the case because he works to elect former Clintonite non-entities like Halter, whose campaign site informs of you of little more than his square jawline. That he sees this as the ideal means of "doing something" and affecting change proves Rahm Emanuel's assessment of liberals right, if for different reasons, as diverting activist resources to the electoral process ignores the fact that all meaninful change comes not from politicians, but from social movements -- and that the state, once established, exists to quell calls for radical change, not undertake it; to maintain the existing power structure, not upend it. Those paying attention not to rhetoric and politicking, but to policy and its implementation in the real world -- including the Middle East, which seems not be an issue to liberals when its fellow liberals doing the bombing -- are well aware of the essential continuinty in governance despite the nominal changes in power. This is evident to most "Kucinich-bots," I'd assume, but apparently not to Mr. Daily Kos and his devotees, calling into question who are the real mindless drones.

*I interviewed Kucinich back in 2007 about his run for president, the Democratic establishment, bipartisan militarism and his endorsement of the pro-war John Kerry.
Posted by Charles Davis at 8:03 AM