Barack Obama: He's not your friend, but what if he was? 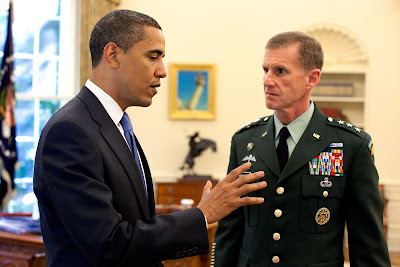 Imagine you have a friend -- let’s call him Barry -- who seems like a swell guy, a real class act. He’s got a beautiful wife, two kids, gives blood, volunteers at the local health clinic on the weekends, even gives a pretty good motivational speech from time to time. Sure, he slaughters the occasional family here, wipes out a funeral procession there, but unlike some cold-blooded murderer, some monster, he does not revel in the senseless violence. No, he laments every death caused by his regrettable but escalating savagery. Did I mention he plays a pretty mean game of basketball?

Now hold up, most people with functioning brain stems and consciences might say. Nice guy though he may be, the whole killing of innocent men, women and children thing? Yeah, not cool. Kind of a buzz kill, actually. Bit of a deal breaker.

Unless you’re talking about Barack Obama. Then complicity in murder -- and the extrajudicial killing of not just precious blonde-haired, blue-eyed American citizens, but hundreds of Afghans and Pakistanis -- becomes an unfortunate, maybe even a tragic thing, but not bad in a I’m-not-going-to-vote-and-campaign-for-you sort of way.

Dennis Kucinich, for instance, while denouncing the president’s decision to send another 33,000 troops to Afghanistan and questioning the constitutionality of the conflict, confessed to Fox News’ Bill O’Reilly that while the surge would undoubtedly be a waste of lives and resources, “You know what? To me this isn't even about the personality of the president, whom I admire.” Speaking later to Esquire on why he was voting for a healthcare bill he had ripped to shreds on policy grounds just days before, Kucinich cited a “a higher responsibility” to “my president and his presidency.” The Ohio congressman went on to say that a victory on healthcare was essential so that the power of the president would not be “weakened,” arguing that with passage the “president will have a stronger hand in domestic and international affairs, and that will be good for the country.” Nowhere in his 2,300-word remarks on the need to boost the president's popularity did he mention any of the ongoing wars and military occupations for which his friend Obama is responsible.

At the signing of the bill, he not just figuratively but, with a smile on his face, literally embraced the president.

Michael Moore, meanwhile, in a letter to Obama on the eve of his decision to expand the Afghan war declared that with that one move he would “destroy the hopes and dreams so many millions have placed in you. With just one speech tomorrow night you will turn a multitude of young people who were the backbone of your campaign into disillusioned cynics.” But at the same time, and after the president had already expanded the war soon after taking office by nearly 20,000 troops, Moore implored Obama to “listen to your heart, and your own clear thinking,” adding: “We the people still love you.”

After the decision to expand the war, which brings weekly tales of the atrocities that always accompany military occupations and counter-insurgency operations, there probably are a few more Obamaphiles turned disillusioned cynics -- but Moore isn’t one of them. “You're such a good guy, Mr. President,” he writes in a more recent correspondence.

The tradeoff seems to be this: in exchange for a president that can speak in complete sentences and not embarrass Americans in front of Western European audiences, and who is willing to throw a few more crumbs to the middle and lower classes, liberals will accept a little murder abroad. Oh, there might be an open letter or two, but few are willing to call the current occupant of the White House what he is -- a war criminal with a million dollar smile -- instead going to great lengths to defend this administration, working earnestly to support Obama’s agenda even when it’s entirely at odds with their own stated views.

This isn’t something new, by the way. When the U.S. military was killing Vietnamese by the tens of thousands in the 1960s, many rank-and-file Democrats and the whole of the liberal establishment were willing to put up with a little senseless murder abroad in exchange for Lyndon Johnson’s promise of a “Great Society” at home. Even after pressure from the antiwar movement forced LBJ to give up his reelection bid, the Democratic nominee in 1968 nonetheless was Hubert Humphrey, a bland pro-war liberal. And given the orgiastic glee with which today’s liberals and progressives greeted the passing of a healthcare bill even proponents are lukewarm about, can you imagine how much murder they’d put up with in return for something like Medicare?

Of course, this probably isn’t the trade-off the president's liberal supporters imagine they're making, and I don’t doubt that people like Moore and Kucinich are sincere in their opposition to the Afghan war, if misguided in how to end it. But their view of the president as a man, or rather what they imagine him to be, colors -- distorts -- their views of his policies, resulting in some embarrassing attempts to excuse Obama, The Man We Thought We Voted For, for the policies enacted by Obama, The Man You Actually Got. Sadly, all too many liberals and progressives remain captivated by the former Obama ™, the persona they’ve been marketed these last couple years: the philosopher-king who probably right this moment is sitting by a fireplace, taking notes and sipping Earl Grey while absorbed in his reading of Rawls' A Theory of Justice. Like the pot of gold at the end of the rainbow, though, it’s a shame it doesn’t really exist.

But this isn’t to say Barack Obama, personally, would strangle to death an innocent Afghan villager, either, or that he begins his day by biting the head off of a cute little kitten (that was always more Cheney’s style). If he bumped into you in the hallway he’d probably say “sorry,” and if he was making a pot of coffee he might even ask if anyone else wants some. But what Obama’s defenders fail to realize is that while he might seemingly be an all-around nice guy who loves his children, someone you could have a beer with if that’s your metric, even nice guys are capable of real evil when they need not experience firsthand the consequences of their decisions. The killing will always be done by somebody else, not the great statesmen -- outside of Iraq, that is -- which is why the study of history can often feel like nothing more than the study of one war after another, each one more barbarous than the one before it. When it's someone else's life on the line, not your own, even the most righteous and well-intentioned will be more inclined to risk it.

And while Obama might seem like a nice, smart guy who tucks his kids in and gives them a kiss on the forehead good night, remember that because of his decisions there are Pakistani and Afghan fathers who will never get to do the same. And remember too that Obama chose to escalate the war on terror within mere days of taking office, when he could have gone ahead and eaten that kitty during a live press conference with Angela Merkel and still have seen a bump in his poll numbers, signing off on a drone strike in Pakistan that killed 18 people before even moving his orthopedic chair into the Oval Office. As documented by the New America Foundation, Obama has continued the bombing ever, dramatically increasing the use of drones in Pakistan -- a country, mind you, with which the U.S. is not officially at war -- killing more than 500 people since taking office, likely many more, a third of them civilians. Weeks later Obama sent another 17,000 troops to Afghanistan, bringing his escalation of that war since taking office to roughly 50,000 troops and at least that many private contractors.

If you’re into peace, love and understanding, well, Barack Obama just isn’t that into you. It’s long past time to stop making excuses for the man and break those last emotional connections. It’s also a good time to remember all those things you were told when you were little about how killing people is very bad, and that, you know, you really shouldn’t do it; at least to my mind, that lesson applies even to powerful people -- taking the life of another not becoming excusable because a simple majority of eligible voters who managed to get off work and bothered to head out to the polls voted into office one of the two corporate stooges allowed on the ballot, or because killing a few foreigners is an unfortunate but vital step to securing a second term.

Getting on my soapbox: Once you come to grasp the basic moral truth that murder does not become acceptable simply because a majority of registered voters lucky enough to be born in the world's most powerful country sanction it, nor is one’s complicity in it lessened by the fact that some 18 year old kid pulls the trigger for you -- that politician’s deserve to be held to the same standard of accountability to which you’d hold a casual acquaintance -- then it becomes a lot harder to maintain the fiction that Obama is not stained with blood shed by his wars. But then I haven’t been reading Daily Kos lately.
Posted by Charles Davis at 12:19 PM