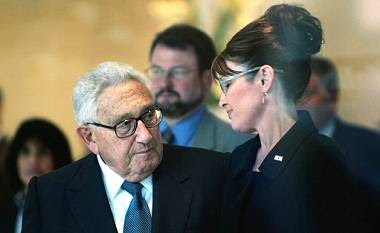 Sarah Palin, like George W. Bush before her, is essentially an empty vessel when it comes to foreign policy (I'm being generous), so it was with great haste that the McCain campaign sought to educate her in the finer talking points of neoconservatism, beginning with a trip to the American Israel Public Affairs Committee (AIPAC) -- accompanied/chaperoned by Senator Joe Lieberman -- where she reportedly "was interrupted by applause twice" for, one presumes, effectively echoing AIPAC's anti-Iran, pro-Likud agenda.
More recently, as The Onion reports, Palin met with former Secretary of State and mass murderer Henry Kissinger, who -- horrifically enough -- passes as something of a moderate realist in the post-9/11 foreign policy debate:

WASHINGTON—In preparation for her debate with Sen. Joe Biden next week, Republican vice presidential nominee Sarah Palin met with seasoned statesman and Nobel Peace Prize–winner Henry Kissinger yesterday to take advantage of his extensive foreign policy knowledge and expertise in carpet-bombing innocent civilians in nations with which the U.S. is not officially at war.

"Dr. Kissinger has given Gov. Palin thorough instructions for launching deadly covert military operations in tiny Southeast Asian countries in blatant disregard for human life and international law," said McCain campaign spokesperson Tracey Schmitt of Palin's brief consultation with the Nixon and Ford administrations' former secretary of state and national security adviser. "In addition, the governor now feels completely confident that, if she is ever required to step in for Sen. McCain to mastermind the toppling of a democratically elected but left-leaning South American government without congressional consent, she will be fully prepared."

Sources close to the campaign said that Palin's meeting with Vice President Cheney about how to claim executive supremacy for the purpose of bypassing constitutional limits on torture has been canceled since advisers feel she already has enough personal experience with the subject.

Posted by Charles Davis at 9:10 PM

Email ThisBlogThis!Share to TwitterShare to FacebookShare to Pinterest
Labels: satire