The myth of America

(Originally posted on the BrandX blog) 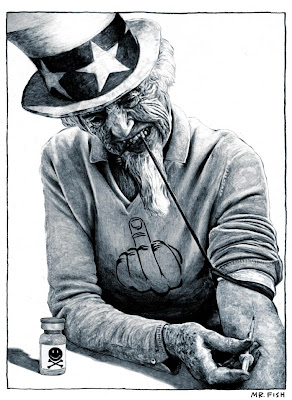 Like any organized religion, America comes with its own creation story, a beautiful, inspiring myth used to lend legitimacy to our modern priestly class in Washington. But there's another story worth considering: the actual one of how the founders of the United States saw their new government as a protection against democracy -- as a means of safeguarding privilege and elevating the right to property over the rights of the people.

During the debate on the US constitution, the founders were pretty explicit about this, making it abundantly clear that protecting property – the large estates gifted to them by the British crown, the men and women sold to them by slave traders – was a driving force behind their push for a more powerful central government. James Madison, for instance, who would serve as the young republic's fourth president, warned his fellow founders of the perils of democracy, saying too much of it would jeopardize the property of the landed aristocracy. “In England,” he observed, “if elections were open to all classes of people, the property of the landed proprietors would be insecure.” Land would be redistributed to the landless, he cautioned. Without the rich exercising monopoly privileges over the commons, the masses would be less dependent on elites like them.

Rather than open up elections to the riff-raff – the 99 percent – Madison argued the American state ought to be structured so as “to protect the minority of the opulent against the majority.” And he wasn't alone. Another delegate to the 1787 constitutional convention, the country's first attorney general, Edmund Randolph, said that as he saw it from looking at the example of the states, “Our chief danger arises from the democratic parts of our constitutions.” In the Federalist Papers, Alexander Hamilton derided the allegedly “pure democracy” of the ancients, saying they “never possessed one good feature of government. Their very character was tyranny; their figure deformity.”

Though wrapped in the detached language of political science, for the founders this anti-democratic position was borne of self-interest. When they warned of minorities losing their “rights” to the majority, they meant their rights to get paid on the federal bonds they owned and to be protected from egalitarian political movements to discharge existing debts. Most significantly, it meant protections for their claimed right to own other people.

At the time of America's founding, a full 20 percent of the US population was enslaved. It was the 1 percent, the slaveowners, who called that freedom and agitated for a break with Britain, where abolitionist sentiment was dangerously on the rise. According to historian Simon Schama, the revolution favored by the small minority of white aristocrats who founded the US government “was a revolution, first and foremost, mobilized to protect slavery." The sanctity of property rights, which was and is enshrined in the Constitution, meant the literal right to own another person.

It isn't that the story of America's founding is a total lie. There were some strong egalitarian tendencies in colonial days, including people-powered movements to restrict the amount of property the rich could claim as their own – they just weren't the dominant strains. It's also not the case that America is the only country to whisper sweet nothings to itself about its historic greatness; all countries tend to that – that's the point. The United States was founded not by deities but, like all nations, flawed human beings. If we want to avoid the mistakes of the past, though, we need to acknowledge past mistakes and the often vulgar motivations of those in power. Perpetuating a myth only furthers the cause of ignorance – and the interests of those who profit from an ignorant public.

(Graphic used with permission from the artist.)
Posted by Charles Davis at 11:46 AM