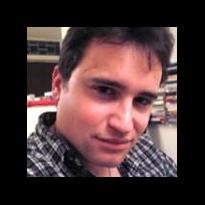 (Benjanmin Kerstein: "You can tell I'm a bad-ass because I'm sneering.")
One time-honored method for obscure writers to gain notoriety is to viciously attack a much more popular writer or public figure in the hopes said person will respond in kind -- witness my constant attacks on Barack Obama, who I thought by now would at least answer me during a weekend radio address or something. Anyway, it’s not surprising that Benajamin Kerstein (who?), a writer for The New Ledger (the what?), would choose to blast the much more popular and accomplished Salon.com blogger Glenn Greenwald for being insufficiently “pro-Israel” given the latter’s blistering and effective attacks on the policies of the apartheid state. What is somewhat surprising, though -- besides the fact that Kerstein was able to compose an essay of nearly 3,000 words, a feat as stunningly impressive as a sea monkey learning sign language -- is the sheer tiredness of the article, which reads like poor imitation of a Michael Savage rant, relying as it does on hysterical psychological projection rather than anything approaching a well-considered, rational argument.


"Greenwald is such a quintessentially anti-American, pseudo-pacifist, pro-terrorist, self-hating Jewish liberal that that he essentially constitutes a living cliche."

It is remarkable, really, that in this day and age, two thousand and ten, writers like Kerstein can blithely accuse someone of being “self-hating” just because they happen to disagree with them on the policies of a modern nation-state called Israel. It's also remarkable that someone employing that cheap line of the attack should be so un-self-aware as to accuse someone else of being "a living cliche", just as it's stunning that a guy who himself left the United States to move to a foreign country he clearly much prefers -- "Bostonian by birth, Israeli by choice" -- should then imply he is somehow the more proud, real American.

We are then told Greenwald's arguments do not arise from genuine disagreements with the state of Israel, but from fear:


"He is terrified that if he defends Israel, or even fails to denounce it in the most hysterical terms possible, he will be seen by his fellow progressives not as one of them, but as a Jew. And, as a Jew, he will also be automatically seen as a heretic and a traitor. To give credit where credit is due, he is probably right."

Now say what you will about American progressives, and lord knows I've said it, but anti-semitic? Timid I can see. Naive and overly trusting of politicians with 'Ds' after their name? Absolutely. But the notion that Glenn Greenwald criticizes Israel because he fears getting lynched by Markos Moulitsas and his gang of online diarists -- are you fucking kidding me?

Predictably, though, the Kerstein piece and the tribalistic, medieval mode of thinking, so-called, it represents was immediately pronounced “Brilliant” by D-list neocon and noted illiterate Jamie Kirchick, a staff writer for the racist New Republic who found the article after it was approvingly passed on by pro-genocide Harvard scholar Martin Kramer. Their circulating of the piece is typical of the neoconservative approach to policy disputes: when confronted with an articulate, outspoken proponent of an alternate viewpoint, the reflexive response is to smear, smear, smear.

Take the case of Trita Parsi, head of the National Iranian American Council and a respected author who was targeted by the far right for the cardinal sin of advocating engagement with Iran, rather than calling for a crippling bombardment. Last November, Washington Times "journalist" Eli Lake -- specifically sought out by Parsi's detractors because of his willingness to publish anything that fits the anyone-who-opposes-war-is-treasonous narrative -- wrote a whole piece accusing Parsi of being a foreign agent working for the mullahs of Iran, which was then approvingly cited throughout the lunatic-right blogosphere, from David "moderate" Frum's self-aggrandizing "Frum Forum" to the long-ludicrous Commentary magazine. Of course, the claims were easily debunkable at the time, but that didn't matter: what was needed was the mere suggestion Parsi was in the pay of Tehran so as to discredit him in the eyes of respectable Washington.

That Parsi is a free man more than six months after the piece was published is all the evidence you need Lake's reporting was and is garbage. Facts, though, have nothing to do with the genre -- it's about silencing a voice, or at least sullying a reputation, in an effort to enforce the militaristic orthodoxy in Washington. That's what Greenwald's going through now, and it's what Parsi went through last year. Going out on a limb: I don't think it'll work.

(Cross-posted at AlterNet)
Posted by Charles Davis at 7:34 PM