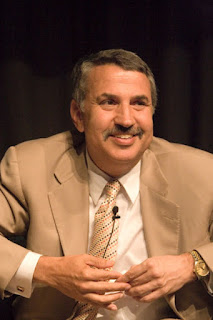 ("Wow, they bought that crap about the Bangladeshi cab driver?")
I am now more than ever convinced that New York Times columnist "Tom Friedman" is merely the made-up, stage persona of a performance artist who just doesn't know when -- or more frighteningly, doesn't know how -- to stop. That or he is just an unusually dumb, vulgar representation of the smug, cruise-missile liberal set. It's hard to tell.

The true nature of this "Friedman" character aside, the latest column bearing his name embodies all the imperial arrogance one can only get from, well, basically every pundit ever on television (more than once), taking the leaders of Turkey and Brazil to task for the "ugly" and "shameful" crime of practicing diplomacy with that "Holocaust-denying, vote-stealing Iranian thug" Mahmoud Ahmadinejad. And I mean, how dare a bunch of uppity, think-they're-somebody nations convince Iran to agree to the very low-enriched-uranium-for-medical-isotopes swap Western nations proposed last October, am I right? Presumably due to space constraints, Friedman makes mention no mention of the U.S. government's billions of dollars in arms sales to democratic beacons like Saudi Arabia, nor of its support for repressive regimes in places like Egypt and Uzbekistan. Noting as much would kind of diminish the whole faux-moral outrage thing he has going, so I understand the decision.

Recycling material from his rah-rah let's invade Iraq days, Friedman then proceeds to argue from a startlingly ignorant premise -- startling for a Tom Friedman column even:


Iran today has about 4,850 pounds of low-enriched uranium. Under the May 17 deal, it has supposedly agreed to send some 2,640 pounds from its stockpile to Turkey for conversion into the type of nuclear fuel needed to power Tehran’s medical reactor — a fuel that cannot be used for a bomb. But that would still leave Iran with a roughly 2,200-pound uranium stockpile, which it still refuses to put under international inspection and is free to augment and continue to reprocess to the higher levels needed for a bomb. Experts say it would only take months for Iran to again amass sufficient quantity for a nuclear weapon.

So what this deal really does is what Iran wanted it to do: weaken the global coalition to pressure Iran to open its nuclear facilities to U.N. inspectors, and, as a special bonus, legitimize Ahmadinejad on the anniversary of his crushing the Iranian democracy movement that was demanding a recount of Iran’s tainted June 2009 elections.

I guess I'm not totally surprised, but apparently Tom Friedman and the Times editorial staff are unfamiliar with the International Atomic Energy Agency (IAEA), the arm of the UN that inspects uranium enrichment programs -- in countries like Iran -- to verify compliance with the Nuclear Non-Proliferation Treaty (Tom, if you're reading this, that's the treaty that guarantees countries the right to enrich uranium so long as they submit to international inspection and forswear nuclear weapons -- hey, like Iran!). Likewise, Friedman and his editors are probably unfamiliar with the most recent report (pdf) from the IAEA, which declares that the agency "continues to verify the non-diversion of declared nuclear material in Iran."

Even assuming Iran's leadership has the worst of intentions -- something all 16 U.S. intelligence agences have pointedly not concluded -- the country would still need to first kick out the IAEA inspectors and alert the whole world to its endgame before it could even start trying to enrich uranium to the degree and scale necessary to build a single nuke, not to mention test one. That Friedman so quickly resorts to such easily debunkable claims to fortify his case against talking to Iran is a pretty good indication as to the strength of his argument, though.
Posted by Charles Davis at 7:24 PM