An energy lobbyist plays dress up

When it comes to journalism, I'm an open tent kind of guy -- nothing is more tedious than some sanctimonious hack reporter snidely dismissing pajama-wearing bloggers and citizen journalists when, as is often the case, it is the bunny slipper-wearing amateurs who are producing the truly compelling work. However, I do draw the line at industry lobbyists passing themselves off as journalists, particularly when it's done because either 1) they want to skate past the $400 to $575 it would normally cost them to get in, presumably in orderto save money so they can go get their golf clubs polished after the panel discussion (double entendre intended) or 2) they can't admit to themselves they are a paid shill acting on behalf the agenda -- and at the behest -- of a much, much wealthier person . . . which, it must be said, does sound an awful lot like journalism.

Here's what spurs my line-drawing: 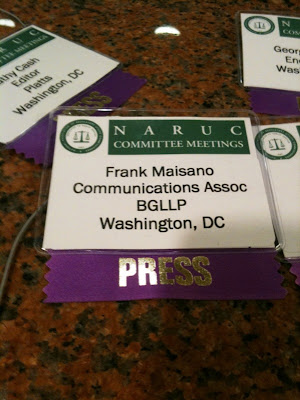 For those not in the know: BGLLP is not, as you might think, texting shorthand for "Big Gulp", but rather stands for "Bracewell & Giuliani LLP" -- yes, that's former New York City mayor and failed presidential candidate -- a law and lobbying shop that represents numerous fossil fuel and other energy interests. Frank Maisano is according to the firm's website a "Senior Principal" and a "skilled media specialist" -- a lobbyist, in other words, and from what I gather from colleagues and acquaintances something of a cross between the overly enthusiastic, "sounds like a case of the Mondays" waiter in Office Space and an earnest and outgoing Satan, the prince of darkness.
But while lobbyists and others pay hundreds of dollars to attend these conferences, working as the do in one of America's last remaining growth industries, I and others in the floundering field of journalism get in free -- free! -- so we can bring you, Joe and Jane News Consumer, the inside scoop on what the chairman of commissions with names you'd fall asleep upon hearing think about the latest innovations in utility regulatory policy; along with free coffee and croissants, hearing the gospel as-it's-delivered, for free, is one of the chief perks of journalism as a profession.
That said, I'm inclined to believe B&G have enough money to foot the bill for attending a conference on the core subjects they litigate and lobby, which leads me to the conclusion that our lobbyist friend for some inexplicable reason feels more comfortable identifying as a journalist than as a much better paid lobbyist -- I'm told not for the first time -- which, if pursuit of respectability in the eye's of one's peers is the concern, is like seeking respite from an uncomfortable seat on a boat by jumping into a lake of acid.*

*(I believe this more or less happened in the 1997 film Dante's Peak with Pierce Brosnan. Hey screw you, it was on TV.)
Posted by Charles Davis at 6:26 PM