As the inauguration of Barack Obama approaches, the nation's capital is spiraling further into police-state insanity, with President Bush just yesterday preemptively declaring () Washington, DC to be in a state of emergency, which means my next post will probably be composed in a contaminated FEMA trailer. Ugly cement roadblocks can already be found miles from the inaugural events, cutting across sidewalks in residential neighborhoods -- factor in the 10,000 or so National Guardsmen and countless police that will be on hand and you have the makings of a hell-on-earth for anyway who values their civil liberties (or sanity).

But the truly fascinating thing about the upcoming inauguration is how DC has been taken over by Obama fever, and boy is it tacky. Just about every vacant retail location has been occupied by a store hawking cheap crap with Obama's face on it, beckoning tourists to come in and have their picture taken next to creepy cardboard cutouts of the president-elect and his family, some even containing mock Oval Offices. In a display of unmitigated naiveté, one store was even selling t-shirts proclaiming, "Peace: Back By Popular Demand." While I appreciate the sentiment . . . if only.

But words can only say so much. Here's a picture: 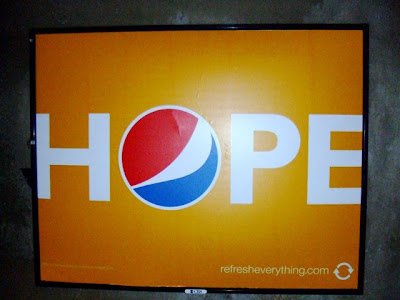 Question: is this advertisement, which I snapped a picture of on my way home from work, for Barack Obama or Pepsi? (Here's a hint: it's part of a slick, multi-million dollar ad campaign focused largely on irrelevant appeals to youth and change aimed at selling a corporate product that -- when the P.R. is stripped aside -- has all the substance of fizzy sugar water. Hope that helps.) 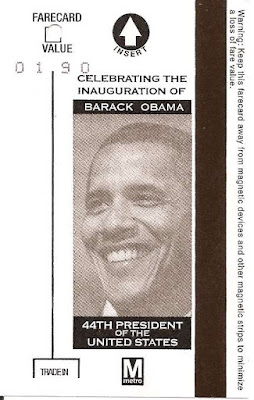 If Vladamir Putin's picture was on the Moscow subway system's metro card, Western observers would undoubtedly consider it evidence of that country's descent into Soviet-style totalitarianism. Here in America? Why, it's collectible!
Meanwhile, those concerned that Obama will merely provide a fresh face for the same evil, corrupt system can at least rest assured that the liberal groups that rallied to his campaign won't merely fall in line and wait for their marching orders like those leader-worshipping right-wingers would, right? 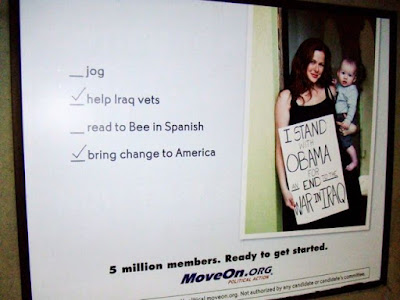 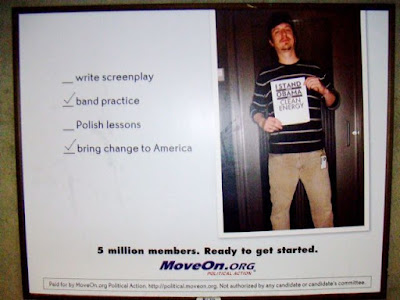 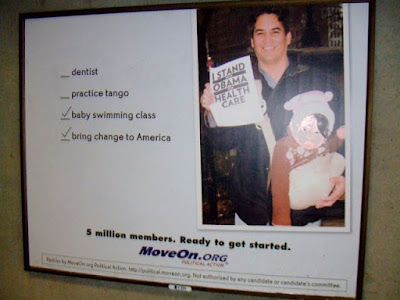 Oh well. (For those that can't see the text in the MoveOn ads above, it reads: "I am a willing pawn of the Democratic Party masquerading as an independent, liberal anti-war activist.")
Posted by Charles Davis at 5:15 PM